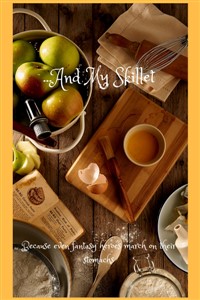 A long time ago, a child was born under the great blue sky. Many a Dwarf grumbled at the auspicious event, tugging furtively at their beards at this ill omen. A year later as the expedition had begun digging into the virgin hills of their new home, the grumbling of the doughty mountain people rose to a disbelieving furor when the yearling passed over the ritual offerings that would determine his lot in life. Instead, the as of yet unnamed child crawled over to a skillet fresh out of the fire and begun picking at the rock bread, unconcerned with the heat.

Shouts turned into laughter, frowns lifted into craggy smiles. Upon placing a handful of the bread into his mouth, the infant’s face grew so grim and stony not even the eldest of the present Dwarves could match him. There was a durable ore within this babe, of that the Lore Keeper was sure.

Yumly Ironhand was thus named, the beginning of his great tale immortalized on the rune walls of his clan’s history.