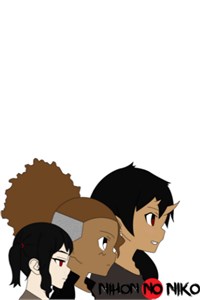 Curious about his heritage, Niko Kamawari intends to spend a month living in a boarding house in Shibuya, Japan. But as he is unable to speak the language, the teenager struggles with many day-to-day activites. Just as Niko is considering giving up and moving back to New York City to live with his father again, he comes across a sharp-tounged, pale-looking girl called Hanako, who can seemingly understand him.

But after meeting her, Niko begins to notice strange things about his boarding house, its residents and even the things in his new everyday routine, like how some of the residents will always are constantly wearing hats, scarves and thick coats inside, others always covering their mouths whenver they speak and some of the residents don't leave their rooms until nightfall. Other strange occurences and rumors begin gaining attention throughout Shibuya, like a group of people all seemingly disappearing at once or a group of strange people who are apparently turning into humans and going on wide-spread murdering sprees...

Things begin to get even weirder when suspicous black cars and people in black suits begin appearing around Shibuya all of a sudden and they seem especially interested in the boarding house for some reason...

Niko's stay in Japan may just end up being a lot more...eventful...than he and anyone else could have ever expected it to be...

"A game is just a game. Nothing more, nothing less..."

Ishmael Hurio is part of a small, four-man gaming team called the Keyboard Warriors. Whilst at a convention to promote thier own game, they find themselves taking part in the testing of brand new MMORPG which was made by another company. As the only non-NPC players in the game, the team enjoy revelling in the detai and beauty of the new game. However, upon logging out of the game, they are flanked by some enemies, a standard practice in MMORPGs.

Will the Keyboard Warriors be able to face their problems within the game, whilst also defeating their own personal demons in reality?