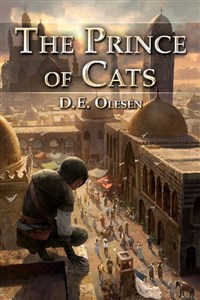 Excellent writing from Quill once more. It's a self-contained story and works just fine as a standalone from the Eagle's Flight, but it also gives even more shades to the already colorful world even so.

The characters are well written, if not quite as developed as TEF characters. Considering however that this is the length of a standard novel the characters are leagues above what you could find in most books.

If the nature of TEF is a bit daunting this is an excellent story to read to get a feel for Quill's writing in a more standard format and length. PoC only has one viewpoint character and only the standard quantity of supporting characters that you could find in any published novel.

The story and style themselves make Quill's mastery easily apparent. You will find yourself easily grasping where the story is going, yet still at the edge of your seat to find out how exactly it gets there and what Jawad will have to go through to achieve his goals. With poems that liven the world up interspersed both at the end of chapters and within dialogue you will also be awed at the ability to write in several different styles.

Finally as for Grammar, it is not really even worth mentioning, there are perhaps one or two dozen errors in the entire book, most of which are just minor excess words or the like which have already been fixed with the help of comments.

Pretty much as Flawless as it'll get

Not very good at writing reviews, but I think this story definetly deserves one so I'll leave my first review here I think.

So far in the 5 chapters ive read I have encountered no real mistakes at all as far as I have noticed, the only ones that I have noticed being ones like forgetting a quotation mark at the start or end of a sentence and even that is 3 or maybe 4 that I have noticed in 5 very long chapters. I might also have seen 1 letter being forgotten in some word somewhere in there but I couldn't find that anymore after rechecking so IDK really.

The style of writing is very descriptive of mostly the enviroment aswell as what the characters are doing but less so of character appearances and their thoughts that they keep to themselves. Which I personally find quite enjoyable, atleast for this kind of story with a lot of different characters who we follow and no real MC. Which leads me to the next point...

In this story we follow quite a few characters, persepctives and "sub-stories". Off the top of my head I think I can count atleast 8 different main perspectives and characters/character groups we have followed so far. And all of the characters feel like real people with real motivations, with most of those for the benefit of themselves or their families but some also working for more selfless purposes. So far I like all the characters we have encountered both in their personalities and how well they are written. I imagine as I read further I will probably start to favor certain characters more and hope for their success while hoping others fail, but I think I will always enjoy all them as characters even if I would never agree with them as people.

I cant yet say much about the story, seeing as so far it has been just getting familiar with the characters and understanding their motives and some of the world they live in. But from what I have understood so far the story should be quite intriguing and fluid with war looming and many different factions wishing to gain the ultimate power in the realm while the heir to the throne is too young to rule.

Also while I said we have quite a few sub-stories I think that might be a bit misleading actualy, seeing as they will probably still be quite fleshed out and intriguing, just that they might not affect the world or realm as a whole really.

One small thing might be that sometimes it seems that the perspective changes from one character to another after they interact with eachother, without the little line skip to signify that. Sometimes that is a bit confusing but usualy it only seems to be for maybe 1 or 2 sentences before it becomes quite clear that there has been a change. I might also just be misunderstanding something too, but it somewhat feels like this happens a few times atleast.

Also while others have pointed out that the story might be slower than others, I honestly feel like that isnt the case. While there isn't much action or anything like that and the chapters are very long, I still feel like much more happens and we learn much more in a lot fewer words than in other stories. Even if those other stories might have a lot of action in those words instead.