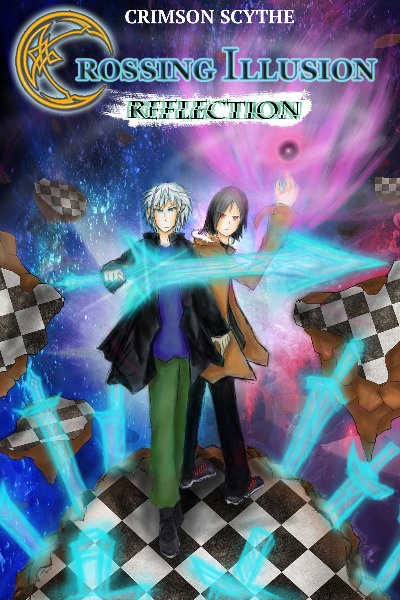 When night falls, evil arise from the darkness. Vengeful fiends curses and terrorize us for ages, and also for ages, that mankind fought them with bravery. Legends of heroes against fearsome monsters has been there for ages, only to be forgotten as mere myths, passed down as fairy tales. However, even now in the modern days, the shadow of nightmare still haunted us, waiting for the day when they might return.

Beyond the veil of harmony, the illusion of peace, the forces of darkness seek to plunge the world into madness. A battle between chaos and order is approaching, seeking for power and dominance. The prophesied war of light and darkness is upon us, as if the end of time is nigh. Can mankind survive when the ancient ones awaken, when the nightmare of the past return?

The story of Crossing Illusion revolve around Noir and Almerich, two young men working at the Special Police Department, in duty to protect the civilians from malevolent anomalies, such as paranormal entities. Armed with supernatural abilities, the secret agents would hunt down monsters, from ghost and goblins, vampires to werewolves. However, demons are not the only thing that threatens them, when mysterious organization begin their scheme, causing havoc here and there. From coven of the witch, supervillain mafia family, undead factory and youkai army are only some of what to comes.

Crossing Illusion is served with intense, action-packed scenes and epic plot, unique blend of characters and fantastic setting, where awesome battled shall unfold. Crossing Illusion is an innovative novel, using multiple forms of narrations, non-linear flow between perspectives. Twist of truth is the spice of the story, with thrilling experience, deep lore featuring various cultures and history of the world. This is a supernatural story wrapped in shonen anime style, about powerful characters fighting for humanity!

The name of Crossing Illusion itself symbolize the dance of mysteries, fiction and reality, in attempt to find truth in myths. "Reflection" is the first part of the trilogy, originally made in 2017 and published in Wattpad, but discontinued many years later. This is the rewrite version, so there's much improvements in the early chapters, that was made many years ago. The original version is currently in the Japan's arc to American's arc, so there's not much change between the two versions there.

Cover art is made by myself, featuring Noir and Almerich.