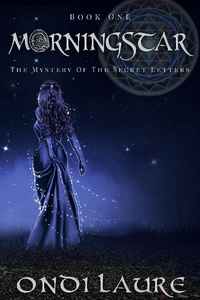 Set in the 15th century Great Britain, Morningstar: The Mystery of the Secret Letters, is a riveting medieval mystery centered on fiery teen Kirsti's search for her missing father, and her daughterly promise to deliver secret documents to a London clergyman.

The girl's epic and fraught journey is complicated by an abandoned infant, a dangerous love triangle, and the persistent temptation to read the mysterious letters she bears. With shady church officials and corrupt soldiers of the crown on her heels, Kirsti draws on her wits and ancient feminine wisdom to guide her through the perilous mission.

As a Royal Lollards Knight, Kirsti's father Charles is a natural enemy of the Church and the new King. His Lollard sect rejects the Church's doctrine of sin and repentance in favor of illusion and enlightenment. The quest for knowledge in the 1500s is a dangerous one. Kirsti, along with friends she finds along the way, fights to preserve ancient secrets from evil hands so that civilization might know truth and transcendence. Can her feminine power and love of her father thwart the Church's and Crown's might?

Morningstar is a historical mystery about a young woman’s quest for truth, survival, and love aimed at women. Ten years in the making, the novel is a referendum on our modern patriarchal society and the current conception of "femininity" that is rooted in extreme beliefs, social norms, and acceptance. Ondi Laure's epic seeks to highlight how the feminine image has been corrupted through millennia—from the Holy and Sacred Goddess to the wicked, gnostic, and dirty "crone" in the modern stories that girls are raised on.

Ondi's novel aims to educate women in general about how institutions have, over millennia, sought to repress and thwart female power, diminish women to old crone and old maid status, and rewrite history to write out the power, love, and sacred feminine norms.

Author Ondi Laure writes for women whom she seeks to inspire with tales of bravery, individualism, and feminine power. She writes with an eye to challenging centuries-old prejudices and patriarchal norms that hold women back from finding and being their true selves.