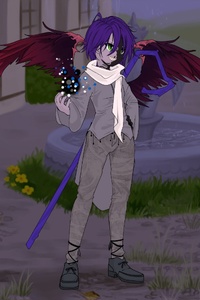 There are many different undead.

The Angels, that are risen from the most devout believers to serve the Holy one.

Demons, known as the tortured souls that survived their punishment.

Zombies and skeletons, the wrongly buried commoners with the ability to infest others till they loose their infected flesh and turn to skeletons.

Vampires, the noble version of the Zombies, Lords of the night.

Liches, the dead that bound their soul to a worldly object.

Ghosts, souls that are only held in the world from overwhelming emotions.

But have you ever heard what happens if you profane a Graveyard keeper? Ever thought about it? Tainted by the Miasma of the Unliving, blessed as the lowest of the holy people to make sure the dead stay dead.

What happens if the grave of a Graveyard keeper is desecrated? Now that the old stories are forgotten, it is time for a new one. Have you ever heard of the being that becomes what he worked so hart to prevent others from becoming? The undead that knows Undead best, and spend years talking to them?

Say my Child, have you ever heard of a Dreadlord?

No? Well..  I guess there is one being born there... I think you will be as interested in its unlive as I am...