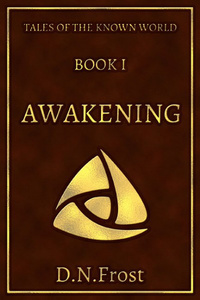 A potent tale of self-discovery.

Centuries ago, the prophetic Golden Age ended in war,
and history spiraled into darkness...

Now, only scholars retain the last portent of the mythic city A'lara, concealed in a distant glade for the advent of the dragon mage.

At the edge of the Known World, the slave Larin escapes her new lord before she meets his dark masters. Deep in the mountains, the legendary elf Kingard awaits his call to battle. When young Darek flees imperial mages tasked to exterminate shape-shifters, he launches them all on a voyage to redeem their unsought destiny.

United by fate and guided by prophesy, their growing band of fugitives journey for A'lara to fight the ancient evil infiltrating the capital. But looming over the gears of fate, their enemies follow the same prophesies. With the unknown close upon them, Kingard and his allies face a mortal quest to restore their infected empire.

If you love Anne McCaffrey, J.R.R. Tolkien and Tad Williams, then Awakening is a novel you will surely want to pick up.

D.N.Frost is a consummate world-builder with a knack for creating characters that are complex and three-dimensional.

Frost writes with graceful prose that is descriptive and well-edited. The plot is fast-paced and entertaining. What really sets this novel apart is the cartography, which is a spectacular accomplishment.

This novel was published in 2014, and it includes 19 antique watercolor maps! Check them out:

Maps of Awakening: an atlas directory 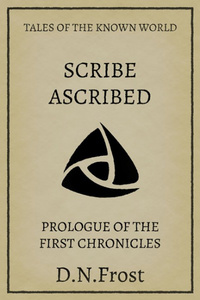 This short story is the prologue of the Chronicles of Mother's Gate series, the first set of books in the Tales of the Known World saga. This prologue is a great little introduction to the saga, a bonus story set apart from the full-length narrative.

Scribe Ascribed follows the story of Farwen, who is one of many apprentices to a renowned map-maker. When his master invites him to scribe the myriad tales of the Known World, young Farwen eagerly sets aside his studies in favor of their new project.

As the initial tale draws to a close, Farwen faces a life-changing decision: resign from the project to create the maps for the story, or abandon his apprenticeship to become a dedicated scribe.

This story answers the question, Who is writing the tales of the Known World? with a well-traveled map-maker and his young apprentice.

It also rasies the question, What started it all? and includes an excerpt from the sister story Tribe Untied, about the persecution of a little boy named Darek.

Thank you very much for bringing this wonderful book to my attention!

The concept of making a book just for prologues is refreshing and definitely making me long for the full stories.

The thing that struck me the most is how authentic every character's voice is and how easy to differentiate them is. The writing is really polished and easy to read.

As an old fantasy fanatic, I'm definitely going to read the rest of D.N. Frost's books. 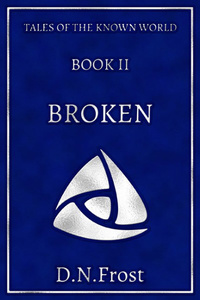 An empowering tale of beginning anew.

Centuries ago, the prophetic Golden Age ended in war,
and history spiraled into darkness...

Now, the saga continues as our heroes prepare for a dark invasion in the hollow aftermath of A'lara's unbinding.

Deep within the mountain fortress of Sierlyn, the legendary elf Kingard frees the captive empress of Allana. Under the elf's watchful eye, the new Light Master Jorn strives to redeem the stains of his past betrayal. When the unwitting darkmage Haisrir embarks for distant Kholl, he unleashes the gravest threat of all.

Divided in purpose and forsaken by prophesy, their fractured band splinters under the burdens of impending war. But looming beyond the eastern horizon, their enemies ready a ghastly armada. Without new portents to guide them, Kingard and his allies face a blind scramble to defend their imperiled empire.

I felt a connection with every character that stretched over a very wide range of emotions.

I eagerly wait for the next installment.

This novel is being published in 2021, and it includes 25 antique watercolor maps! Check them out:

Maps of Broken: an atlas directory 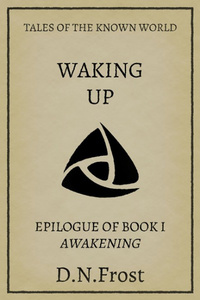 The story of Larin the Builder
in the aftermath of Awakening
This short story is the epilogue of Awakening, the first book of the Chronicles of Mother's Gate series. This epilogue is a great follow-up to the novel, a bonus story that adds extra layers between books without being necessary to the main storyline.

Waking Up follows the story of Larin, who is alive but unconscious after her ordeal in the Nine Hells. She awakens in A'lara City a few days later and recuperates under the steadfast care of her repentant friend Jorn.

As she reacclimates to her waking state, Larin struggles with her gruesome memories of the Hells and her decision to conceal them from Jorn.

This story answers the question, Is Larin all right? with a resounding yes, and some storms on the horizon.

It also rasies the question, What happened to her down there? and includes an excerpt from the sister story Falling Down, about Larin's ordeal in the Nine Hells.

Praise for Waking Up and Falling Down:

Loved it. The difference between the two stories is great!

The difference between Waking Up and Falling Down is astounding. So much light and love in the first story. You feel safe reading it. Healing.

The second, so much darkness, pain and despair. The choice of vocabulary is awesome and makes an impact.

And this set of short stories ties the two books together so well.