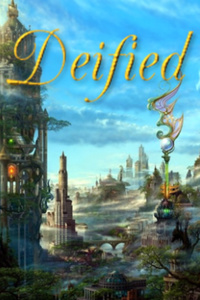 They say the universe began when The Seven awoke. They, seven humans from Earth have been transported from their homes to a completely new world, a blank canvas of a universe for them to fill with their newfound omnipotence. But they soon find they are not free to do as they wished. A being claiming to be the god of their world told them they must build a fantasy world for their entertainment.

Thus, these new gods must cooperate (mostly), plan and construct a new world, becoming the cosmogonic myth of their own creation.