A diamond in the VERY rough

I have been informed that this is the author's first story, and you can definitely see all the mistakes first-time authors make. Yet, through all of these issues, you can see a well-thought-out story shine through.

Style: Show, don't tell. A mantra that every author gets shoved down their throat when they start out. For some it is harder to implement than others, but we all eventually learn. You can somewhat see that learning process take place over the chapters, but that doesn't change that the first few chapters are a real chore to get through.

You are subjected to the mother of all exposition as the author just dumps the entire history of the world on you over the span of one chapter. It feels like it gets better over the chapters, but then, in the most recent chapter, a new character gets introduced, and you're treated to yet another humongous dump of backstory.

This definitely needs fixing, and I implore the author to look back at their first chapters, and fix them as best as they can. The first few chapters are the most important ones to reel in new readers, and I'm afraid few will make it past this hurdle in order to see the goodness of what lies bexond.

Story: As far as the story goes, so far it is a fairly standard fantasy story. An isekai, as we call them today, to be exact. The world it takes place in clearly has received a lot of love and has a rich backstory to explore. The whole world seems believable and nothing seems to be contradicting each other.

Grammar: For the most part, the grammar seems to be correct. There's a few misspelled, or misplaced words here and there, but it's nothing I can't deal with. What is more jarring, is the way the sentences are structured sometimes. This is also an issue that plagues mostly the early chapters.

It is sometimes hard to discern who is talking since the proper punctuation is missing. The sentences have a bad flow, which makes it hard and tedious to read at points. Then again, sometimes they present too much information at once in a single sentence, making it hard to keep track of all the info provided, triggering the need to read sentences several times.

Again, I implore the author to rethink the approach of their first two chapters. You have gotten better in the later chapters, so if you return to your early chapters, I'm sure you'd find ways to make them better already. Maybe you're feeling the pressure from the writathon, which caused some sloppiness. I won't recommend dropping out, but once we're done, please, take a look back and learn from your mistakes :)

Characters: There aren't a ton of characters present within the story currently. What is there, hasn't received a lot of love aside from info dumps so far, but you can tell that they too, have been well thought out. They each have a unique personality, with flaws present(which is a good thing).

Overall: Right now, getting through the first chapters is a chore, but once things actually start moving, it becomes interesting. So if you think you can manage a messy info dump in the beginning, I promise you, what lies beyond is a story worth reading. Even if it may not be as professional as the stories we're used to.

All in all, a solid attempt at a first story. 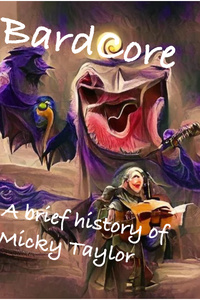 The tale of a shanty with some slight issues.

An interesting story about a lad dropped off into a rather intriguing universe, that is sadly plagued by some issues in the way it is presented.

Style: As far as style is concerned, this story has it, and quite a lot at that. It's very descriptive about the environment and like to use words that I need to look up to understand. Sometimes, the paragraphs are a bit too long, or sentences blend into each other, making it difficult to read. There was one chapter that was basically just a single, humongous paragraph, due to missing formatting, most likely.

Story: The story itself is interesting. Where it shines most in my opinion is the world-building that's going on. There are many races, places, and systems to explore, and all of them seem well thought out and interesting. There's a race that is a literal collection of snakes. I mean, how cool is that?

The story seems like a slow burn for now, as the MC explores this new environment, learns about the people living there, and finds his own place in it. All in all, a good and interesting read. There seems to be some attempt at a budding romance in the latest chapters, which seems a bit shoehorned in. Mostly because it just feel too early in the story, considering the MC's circumstanced.

Grammer: Probably the weakest point here. Overall the grammar seems to be fine. Great prose all around and a real effort to write things believable. Which makes the mistakes all the more glaring and jarring. Now, I'm very forgiving in this department, as it's pretty easy to make mistakes, especially since the writathon causes some authors to rush their work a bit.

Yet, there are mistakes present in every chapter that really disturb the reading experience and the immersion. It's especially sad to see this since most mistakes could've been caught by a simple read-through before posting, or using a simple add-on like Grammarly. I agonized over what score I should hand out here, but eventually decided to be a bit harsh since every chapter is affected.

Characters: Coming from a bit of a low point to a high point. The characters in this story are all amazing. Each and every one of them seems like they are a proper person in their own right, and not just a cardboard cut-out.

There's little else to say, other than: Bravo!

Overall: Definitely a good read, can recommend to anyone who is interested in some good world-building, or just generally looking for a more relaxed LitRPG experience.