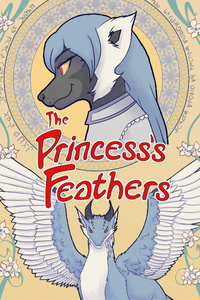 The Dragon captures the Princess. The brave knight appears to save her and slays the Dragon. Wooed by his gallantry, they both live happily ever after. I'm certain you've heard a variation of this tired fable countless times before. Real life isn't so idyllic, though. Far stranger, I've recently discovered!

I'm a Princess too — at least, I used to be. While exploring the countryside a terrible event occurred and my life was plunged into danger. But instead of being captured by a Dragon, I turned into one! Acting on my draconic instincts I was able to defend myself and save my life. Wonderful! Now there's just one large, fire breathing problem: How do I turn back to normal?

Um, I didn't ask for any of this, you know? I'm the Princess! I have a Kingdom to run, I can't be a Dragon! Why did this happen to me? And what am I going to do about it?

A fantasy novel with dragons, anthropomorphic characters, and hand-drawn illustrations! Expect some slice of life before delving into adventure after Princess Asha transforms in this chapter. Currently updating on Mondays.