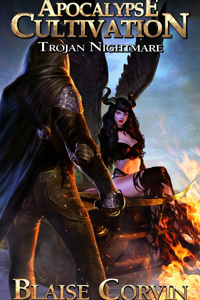 The earth has been overrun with monsters.  Post-Purple Rain America is unrecognizable from the past.  Jake is an adventurer, a leader of an adventuring team.  A former mage, now he follows the strange path of cultivation.  As far as he knows, he is one of the only people on earth who have stepped onto this path.

Events will unfold that change Jake's life forever.  He is about to be caught up in something much bigger than himself, but one thing Jake is really bad at is giving up.

Secret of the Old Ones
HIATUS
172 pages

Secret of the Old Ones is a deep dive VR game the likes of which the world had never seen.

Trent Noguero, a hardcore gamer, has been playing for a year and is about to get his big break. He is about to catapult himself into the ranks of the most powerful players in the world.

However, power comes with a price, and celebrity creates enemies. Trent has the keys to massive success, but he also accidentally painted a target on his back…both in, and out of the game.