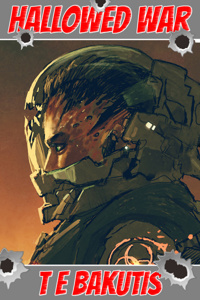 “The good news? I just got superpowers. The bad news? I have to fight cannibal lunatics or I’ll turn into one."

Explosions, followed by segments of character building and interpersonal relationships, followed by more explosions. Not every chapter will be about combat missions, but I'll try to keep the non-combat chapters relevant to character growth.

My world and setting are heavily inspired by Final Fantasy VII, with a large corporation of questionable morals and a big round city which is simultaneously futuristic and old-fashioned. Hallowed, my super soldiers, are similar to SOLDIERS from Final Fantasy VII as well, right down to their superhuman strength and softly glowing eyes.

The primary antagonists, Mutes, are similar to the "fast" zombies and tanks you fight in Left 4 Dead, though there's definitely some necromorph (Dead Space) inspiration as well, and a fighting style reminiscent of genestealers (40k).

My battle scenes are usually squad-based battles against scattered groups of Mutes in urban environments, similar to the normal missions in X-Com: Enemy Unknown. I've also added casualty reports after each mission for my own entertainment.

Finally, you'll likely stumble across some Easter Eggs. I apologize in advance.

I don't have my own Discord and will likely not be creating one (mainly due to sheer laziness) but if you'd like to hit me up on the Aethon Author discord, you can find me (and many other authors!) hanging out there.