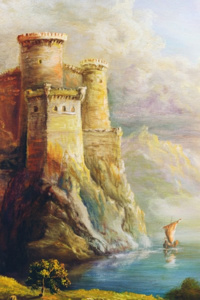 A trail of clues... a political conspiracy...

Enzo and Leonardo are renowned adventurers who specialize in Rare & Esoteric Artifact Recovery. With their guild on the brink of bankruptcy, they embark on a quest to locate Ilhen's Seventh — a legendary deathtrap brimming with occult treasures.

But complications abound. Rival adventurers are also on the hunt, and Enzo suspects they're being followed by the Empress' shadowy spy ring, the Black Cabal.

And worse, Ilhen's Seventh is not what it seems. As they race to solve a trail of cryptic clues, they are drawn unknowingly into a sinister conspiracy...

Any support/encouragement/feedback is greatly appreciated.