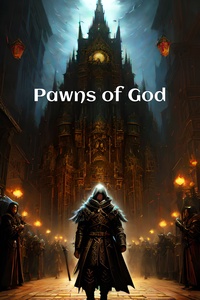 Five Lines Pitch
Join Mark in his fight against a God and change the game's destiny!

Delve into a slow-paced story focused on the progression of the main party and the development of the world. Mark himself will be narrating his life inside the game, and to a much lesser extend outside. Guild building, economy, and strategy are the central pieces of the novel.

Mark is not overpowered, he will have to build his own power through action-packed battles, trials, traumas, love, and death. Accompany him, the healer and the strategist, an agent of chaos, in the adventure of his life.

Without further preamble, I will let Mark take the mic.

Synopsis
Hi! My name is Mark.

This is my story, my life as I live it day after day. I’m in my thirties, and there’s nothing I love more than playing online games. I’ve just joined the action on the newest VRMMO game, Pawns of God. An immersive experience you can play while sleeping. Of course, as a game that takes pride in its long development and technological advances, everything inside seems and feels real.

Beware, this is not a game-turns-real story. I love my own world and I would detest being summoned into another one. If that ever happens, I’ll just quickly take my life and be done with it. I play with my friends, in a party of 5. We have taken several roles, but lately, I've come to love being a healer. It's my secret ambition to someday be the shotcaller.

I am not overpowered. If there is any bug or exploit in the game, they are yet to be discovered. Anyhow, for a game of this scale, the company is pouring all of its resources into test servers, QA, and beta tests. I don’t expect to find any, so I’ll be playing the game just like any other person. I must say, though, I am easily distracted, as you will immediately notice once you start. I'm working on it, I promise to improve!

I am no hero. Being in my 30s, my heart is too old for this shit. I wouldn’t mind being one, of course. Who hasn’t dreamt of it? Either way, I’m not doing any grand quest to save the world. Whatever the game throws to their users, I’ll be there to experience it.

Most of my life, at least the interesting parts that I’ll be narrating, happen inside the game itself. Rarely, there will be some IRL (In Real Life) chapters. You’ll understand, however, that as a freelance software developer, there is not much I can entertain you with when outside the game.

Did I say I love games? Well, I’m also a fan of LitRPG literature. You know, journeys of magic, relationships, personal development, items, skills, discovery… In the spirit of not overwhelming my public, I’ll condense each chapter into circa 1500 words.

You might have noticed some tags over this story, let me elaborate. I like to swear. I’m not shy when it comes to cursing my enemies, friends, or even myself. When there’s blood, I tell it as I see it. And… it hurts to admit it, but I’m not a casanova. Of course, this doesn’t mean that I won’t ever find love. So, in case I do end up finding it, let’s keep my sexual options open. As for traumas, none yet, but the future is vast and unknown.

The schedule is subject to change, particularly if enough readers end up loving it. All chapters are already written, thus there is enough freedom to modify them.

All subsequent arcs will follow the same release schedule, 2/week. No hiatus will be done between arcs 1 and 2. 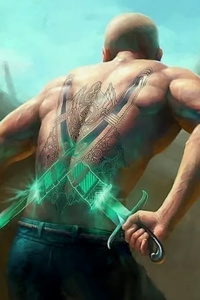 The Empire of Ink
ONGOING
286 pages

In a world where all your properties are tattooed on your skin, Ink is the most precious resource. Wars are fought in its name. Blood is shed for a drop. Ink is the currency and the law.

This is the story of Tarar the Royal Inker, a charge given only to the best professional of the Empire. When the King fancies a new item, it is he who is called for the engraving. When the Queen wants a new weapon, Tarar is summoned to the court.

Discover his past, a boy of the House of Nul. A nobody. A castoff without family nor riches.

Follow his career, his rise to fame and infamy. Fall in love with his lovers, fight along his side, explore uncharted territories, and uncover the mystery behind the empire’s most powerful tool; Ink.

Join Tarar in a frenetic journey of magic, action, and fantasy.

* The image is a placeholder, I don't own its rights. If you are the author and would like it taken out, please contact me and I'll comply. 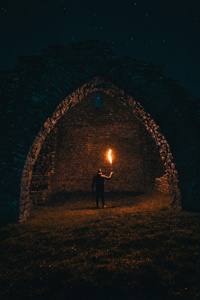 This will be a collection of disconnected short stories, not necessarily completed.

If someday I find myself in the mood to write something else, I will post it here. And, if that story receives some love, I might take it as a side project once I finish my currently ongoing fictions.

Please note that they will range from pure fantasy to litrpg, each chapter is generally independent of the others, although I will at times expand previous ideas. With that in mind, chapters are named as 'Story name // Chapter name [Genre]'. They will range from 500 words to several thousand.

Show some love in the form of comments, reviews, and ratings!