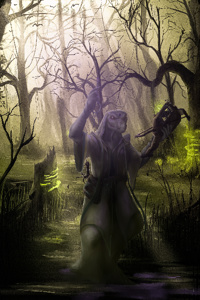 Those first few chapters were pretty ugly and strange, but as I've been reading this story just keeps growing on me. It’s long winded and slow, but it’s different, and in a good way.

The story is hard to explain; it’s an isekai where a guy from earth who says he used to be some special forces bad*** but then goes on to talk about how now he’s old and fat and bald gets reincarnated into a lizardman, gets beat up a lot, and tries to find a place for himself. I thought it would be action and adventure, and it has some action, but it’s more detached and it feels more like a slice of life to me. There’s a lot of crafting and exploring and there is some humor but it’s usually pretty subtle, but what is leaving the biggest impression this story makes on me is that it is very, very dark. The fights that get described are vivid and gory and disturbing, and it doesn’t go the same route as most of these novels where all these harrowing near death experiences are happy go lucky and you’re safe because you’ve got half of a plan. This is one of the first novels I’ve read on RR where the place really does seem dangerous and brutal. It’s way darker than I’m used to, but it’s good.

The weakest category imo. I know it’s a first novel, but stylistically it could really use some work, especially those first chapters. The story thus far is a first-person point of view litRPG that clear plans on following the old weak to strong progression, but where I’m at the main character is still weak. I don’t care for the system being used, it feels clunky and restrictive rather than flexible and organic, but as the story has progressed it does seem more consistent and better balanced than is normal for RR.

Beyond that, the author tends to ramble a lot. The entire story is delivered in a 4th wall breaking conversational format, like he’s just telling you the story, sometimes past tense, sometimes present tense, but he acts like you’re a voice in his head and he’s just talking to you. It’s ok, not the worst, but not the best. Staying strictly first person is rare in novels, we’ll usually see an omniscient viewpoint for info dumps and lots of side character points of view by this far into the story, but so far all the world building and info dumping has occurred in the context of the story.

The chapters are long, and the updates are frequent, both of which I really like: I’m a binge reader who likes to check in on favorited stories once every week or two, and I really like both the update length and frequency, because that makes it so that when I get around to binging story updates feel meatier than if I were checking them as fast as he posts them.

It starts off with overly long paragraphs, I’m not sure why the author hasn’t gone back and broken those down and cleaned those first couple chapters up, and some of the phrases he uses a lot are clunky, but even though the author bio says he doesn’t have an editor there are very few typos or real problems. The author clearly possesses an excellent command of the English language, and I'm pretty sure it's their native language.

The main character is the main character, and everything is delivered through his point of view. The author tends to move through time pretty quickly with weeks passing in a blink, but he does a very good job portraying the main character and making them feel like a real person instead of a prop through which he's delivering the story, and I’ve started growing  attached to some of the side characters too, through the sections of dialogue and actions that cover them.

Most stories I feel like the authors give the side characters exactly one personality trait and that one trait defines everything about them. In this story I hardly feel like I know any of the side characters, but I also feel like there is a lot more to them than a single experience and trait. Instead of simple narrative tools, they feel more like real people, and that’s something special.

I’m giving this story 5 stars overall in part because the other reviewers are under rating it; but it’s also a good story, in my opinion deserving at least 4 stars, it’s just slower and a bit more circuitous than I expected. Kind of like life. The author is doing something different from normal, and even though not everything he is doing I love, he’s taking risks that I can appreciate, and it’s turning into one of the most logically consistent and surrealy engaging stories I’ve read. People actually have motivations that extend beyond supporting or fighting the protagonist, is that even possible?!

Not everything that happens in here is either happy or ends in an emo breakdown, and you get to explore a fantasy world through someone else’s eyes and not everything in that world is shiny and fun. It’s not for everyone, and that becomes obvious in the first couple chapters, but I can’t wait to keep reading and see where this story goes from here, because it’s a very different approach to the fantasy/litrpg/isekai genre, it has depth and character, and it really stands out for taking a more mature approach to storytelling than we normally see here.