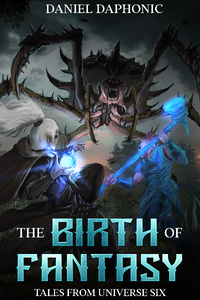 The Birth of Fantasy
by Daphonic
HIATUS
624 pages

Fresh out of the academy, Zeal is on his first solo outing as an Abator. The anomaly he's sent to study prevents his death and transfers him to a new universe. Universe Six, as The System tells him, has vastly different fundamental laws. They include the governing of magic and the strange tattoos that ink themselves onto the body called Stigmata.  Journey with Zeal as he makes friends, enemies, and bonds with an adorable Kobold named Luin.

The Birth of Fantasy is a Gamelit,  Litrpg with Cultivation progression instead of stats. The release schedule will be Monday through Friday.