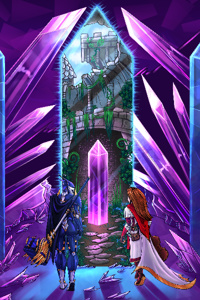 I am in need of usernames for player characters for this story. See this thread for more information!

On the 10 year anniversary update of the MMORPG Annwyn Online, millions of players around the world suddenly find themselves pulled into the world of Gaea in the bodies of their characters with access to all their spells, items, and levels.

Whatever magical beings brought them to Gaea are silent and amid the chaos and confusion, Ashley "Sinnamon Roll" Miller, Andrew "W3aver" Weaver and nonplayer Lieutenant Tyressa Pearce of the Cross-Borders Army of Knox, find themselves caught in the middle of a bloody player-driven plot to force the beings that brought all the players to Gaea to send them home.

In the aftermath of the attack on the village of Point West, Sinnamon and W3aver learn the reason everyone was brought to the world of Annwyn Online: The game was created as a bridge between the two worlds by a race of powerful mages known as the Seer Elves. The Seer are not silent out of malice, but because they are all dead. Every player has unknowingly been drafted into an army as a last ditch plan to stop a great evil and it is up to the Soul Forgers, the decendants of the Seer, to help the players keep that evil from extinguishing the sparks of life in both their worlds.

On his quest to reunite with girlfriend who was resurrected by The Event which dumped all the players into their character's bodies, Isaac "Saiph" Thomas learns two important things:
1. Not all of the Seer are dead.

2. Even the best laid plans can go awry.

Soul Forged follows multiple characters, both Player and NPC, from different backgrounds as they navigate this new reality they find themselves in.

Link to the full sized book cover, for those curious. Link to the artist at the bottom of the prologue :)