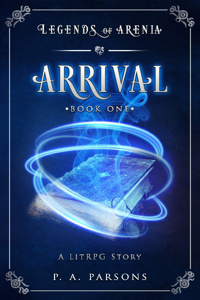 Arrival: Legends of Arenia Book 1 is now available on Amazon, Apple, Kobo, and Nook! Interested in the Audiobook? Find it on Audible!

A quick update for those who've been asking: I know that Book 2 has been a while in coming, but I ruptured a ligament in my right hand, which has slowed things considerably. Rest assured, this book has not been abandoned! I'm well into Book 2, and can't wait to bring you the next installment of the Sullivan family's Arenian adventures!

The Sullivans are a normal family. But after being transported to the magical world of Arenia, normal isn’t a luxury they can afford.

It's just another Thanksgiving for the Sullivans—until the walls disappear and they discover they are being transported to Arenia, a place where game rules are real and their Earthen ability to reincarnate grants them unlimited potential.

Or it would, if the celestial administrator in charge of their case hadn't mixed up longitude and latitude and sent the wrong family. Oops. Too bad he already faked their deaths.

Now scattered throughout the Arenian wilderness and armed only with their Tomes—books containing all of their skills, accomplishments, and quests—the family members must discover a strength they didn't know they had if they are going to survive long enough to find each other.

Note: Contains some profanity and a turkey, but not a profane turkey. Personally, I'm fine with profane turkeys, but if that's where you draw the line, you should know there are none in this book. In fact, I'm going to promise you no profane turkeys for the entire series. That's my gift to you.