See you next mission!

The Perfect Run takes place in a post-apocalyptic, alternate history version of our world in which a large portion of the population suddenly gained superpowers through the actions of an enigmatic figure known as the Alchemist, resulting in widespread chaos and the collapse of most national governments.

Roaming through this world is is our protagonist, Ryan Romano, codename Quicksave. He's got an impeccable sense of style, and always has something witty to say. Initially it might seem like he doesn't take things seriously, but that's because he's lived through it all before. He's in a time loop, but one of his own making.

Unlike other time loop stories like Mother of Learning, the 'how's and 'why's of the time loop occuring are not a mystery, and by the beginning of the story Ryan has already mastered his ability to control it. He decides whether to restart or move on, and he's decided that he won't move on until everything goes exactly the way he wants, which is no easy task.

It's a treat to see how an experienced time traveler operates, taking advantage of information gained from previous loops that he couldn't possibly know in the current one, capitalizing on some opportunities as they crop up in the present and filing others away for potential use in future loops.

The different factions that war over and exploit New Rome are well fleshed out, each with their own motives and methods of achieving them. Due to the nature of his power Ryan is able to join each one in turn and explore their inner workings in great detail.

There's a colorful cast of characters, superheroes, supervillains and everything in between. There are no "Hawkeye/Black Widow" type characters that make you question "What are they even doing here?" Everyone gets their turn in the limelight, their personalities and powers making a unique impact on the plot.

There is a non-stop barrage of witty quips, memes, and references in both dialogue and narration no matter who's involved. Like everything else, it's done over the top, so there's the inherent side effect of some quips missing their mark or feeling forced.

It's cheesy, yes. It's corny, sure. But I happen to like cheese flavored popcorn, and if you do too then this story will make for one hell of a snack. 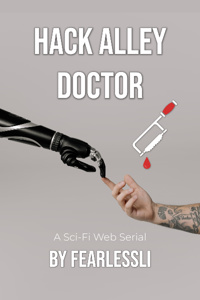 His Vision is Augmented.

Most cyberpunk fiction focuses on larger than life figures: the secret agent, the super soldier, the elite hacker chuckling behind his seven proxies.

Hack Alley Doctor takes a different approach with its protagonist Derrick Yu, a fairly ordinary young man who deals with the same kinds of issues as everyone else: a messy room, annoying co-workers, and earning enough money to make ends meet.

Through Derrick's eyes we see a world much like our own, perhaps too much if you were looking for a more escapist venture. There's urban decay, gang violence, vices, and other deep seated socio-economic problems in the 'hood as is par for the course in this genre, but from the very first chapter the author shows that they are quite capable of handling these topics.

The setting is New York City but 20 Minutes into the Future, where things like fully functional robotic limbs and police drones are commonplace. The author does an excellent job of keeping things grounded in reality; all the examples of advanced technology on display could either feasibly exist in real life or already do in some form.

The perspective of a medical professional on this run-down future is also an interesting concept. I'm not a doctor(Dammit, Jim!) but I can tell the author has done the research and knows their stuff when it comes to portraying precise, anatomically accurate details.

The action scenes, while a bit scarce, are gripping and well paced. I'm definitely looking forward to what comes next.

To sum it all up: Have you ever seen a prosthetic arm that looked so cool you'd want to replace your actual arm with it? While I wouldn't recommend going that far, I would highly recommend you replace whatever you're currently reading with Hack Alley Doctor.