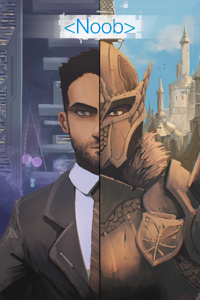 Final Conquest, developed by Black Lotus Studios, is hailed as the world’s most popular SCMMORPG (split-conscious MMORPG) boasting more than 1 billion registered users with the help of Body Gear’s ‘Splicer’ - a capsule-like device that injects one’s conscious into the game. When Vladimir, the developer and creator of Final Conquest suddenly dies with no one being able to replicate his development process, it spells doom for Body Gear, Black Lotus Studios, and the world.

Our hero Andrew, Vladimir’s long time best friend and the Founder of Body Gear’s son, receives Vladimir’s will telling him that he knows how to save both of their companies… but he must complete Final Conquest’s tutorial in four days in order to get the world-saving information. There’s only one catch - Andrew hates videogames.