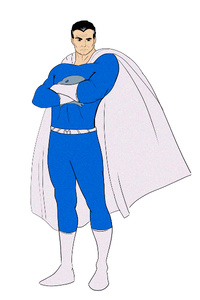 *Scratches chin* I wonder what I think of this..?

This is my first review and it is not part of a swap. I am going to try and write it with readers in mind and so will be vague with details where I can as to not spoil anything. I hope that comes across.

What you'll find here is a series of 8 self contained stories that have the heroes go up against a persistent and creative villain and their henchmen as they cause havoc across the city in pursuit of domination and control. There are also other villains that pop up to have their go too, offering a diverse range of crises for the heroes to deal with. My particular favourites were chapter 2 and 6.

Stylistically, it has a seriously and comforting nostalgic, retro and vintage feel, drawing in references and vibes to 60s and 70s media, Golden and Silver Age of comics and even 90s TV shows and cartoons.
Despite the technology in the setting, I sort of imagined it to be with a 60s and 70s aesthetic (much like Netflix's Sex Education has a strong 80s aesthetic yet obvious modern setting) and there was a bit in one of the later chapters where Jack was listening to 'rock and roll music' on the radio which in my head gave it a neat 50s 'Grease' twist to it. (I'm picturing side partings waxed down with plenty of gel, telephones with a spinning dial and mums pushing marmet prams [I had to look that up, that's not knowledge I have] as they flee from terror on the streets of their city.)

Further more on from how it's written, it's written like a comic book from the days of yester years would have been, had they not invented drawings. The 'voice over' which you would find in the yellow narrative boxes on comic panels are here throughout the chapters in italics, setting the scene- which means we are thrown straight into the action. I feel like we're given exactly what we need to know, and there's nothing that we still need to be told in order to be immersed in what is going on.

The characters here are fully fleshed out. This is a standalone series where these characters exist separate from what will be Coming Soon. This is an amuse bouche of what's to come. And consider my bouche amused.
[I've just come back to this and I just want to be clear that this is a positive]- We don't need tonnes of character development in this mini series. That's not what this is about. And I think that's a really good thing. I think there is a real strength in being able to come out with a mini teaser type series that presents us with these characters as they are in the moment, giving us a good time 8 times over and leaves it at that. You just need to sit back and enjoy the toils and capers they get involved in.
That said, my fondness for chapter 6 is partly due to getting a first glimpse into Jack and David as characters and their dynamic together not just as heroes. I hope that makes sense to everyone...!

As I read, I made some notes and I wrote the word consistent, because it is consistent throughout. The series knows what it wants to be and delivers it each time.

It is really well written with nothing wrong with the grammar or spellings at all. There's not much more to say on that front really.

I really enjoyed this mini side hustle offering us a first taste of what is to come in the future for Switch, (which has been discussed in the forums and in conversations with TienSwitch- so I'm not spoilering anything by saying so).