The Dog at the End of the World
ONGOING
352 pages

Lucky Lachlan is just your average mutt. He's been living with his Girl for as long as he can remember and he'd do anything for her. He might have to do more than he bargained for.

One day when he awakened from his mid-day nap, he saw a box. It had no scent and floated calmly in the air.

You have been chosen.

The End is coming in three days.  Prepare yourself!

Thanks to Kieran Pierce for the lovely cover!

Dog at the End of the World is a participant in writathon. 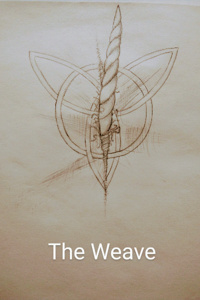 Rifts in the Weave
HIATUS
449 pages

Jes is a normal twenty-something American dealing with a 2020 that just keeps getting worse. She's driving home for the latest in that series of awful events when she runs headlong into something unexpected.

Nearly 400 years ago, the continent of Charan was embroiled in a terrible war. To stop the war, its inhabitants literally tore a hole in the fabric that holds their world together. The Weave, the magical lines of reality that shape every part of Charan, were torn by great magics. Those magics left a hole in the weave that has since consumed nearly a third of the continent, creating a vast and magicless Outalnds. The Wild Weaves at the edges of the Outlands are a dangerous place.

Archmagi, pushed to the edge by a pursuing army, enter the Wild Weaves and seek to repair the very fabric of reality.

Howard and Clark Franklin, returning soldiers from the Civil War, come back to a home that isn't quite theirs anymore. Restless, they depart again for the West, a new frontier. They get more than they bargained for when one moment they're crossing the prairie and the next they're stepping into a whole new world.

As the unraveling edges of reality fray, two worlds may never be the same.

<<I'm not the greatest at synopses, but I hope this explains the story a little more. I will be going through and editing the earlier chapters to give a bit better flow to it. I'll post changes in the top author note. Hopefully, it'll make new readers have a bit better time getting started. For those of you who have been with me all along? Thank you so much. This endeavor has been so damn fulfilling! >>