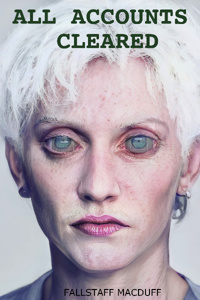 This is a story of four people in the near future: the autodidact, out to challenge a system; the artist, thrown into a working world she despises; the patriarch, a man trying to restore order to chaos; and the gangster, fighting to fan the embers of fading hope. One of them may save the world. Any of them may bring it to an end. 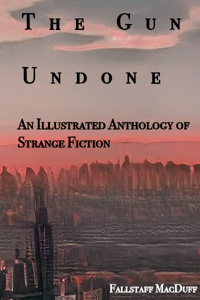 Some people like to say you can only change the world through the barrel of a gun. That you can't make a difference unless you're looking at what's ten feet in front of you.

But other people take a longer view. They see a stranger world coming, slightly past the horizon -- whether we want it or not.

They know that we made this world with much less than a gun --  without any effort at all, not even a thought.

So imagine what would happen to the world if we gave it a thought...

In this illustrated anthology, a pulp veneer is wrapped around the New Weird in a sequence of peculiar tales:

Consider the Finger
Lost in the multiverse, a brilliant schoolteacher finds herself in a lot of trouble.

Do Not Push
In a green and meditative future, the narrator and their father make an unlikely discovery at the bottom of a landfill.

Prodigal Run (novella)
After a heist gone awry, a team of mutants race through a degenerating world to deliver a dangerous cargo. [3/4 completed]

Guardians of the Earth
A pair of college students are forced to look deeper into history than they had ever wanted.

The Castle Ends
We will never learn the ending of Kafka's The Castle, but we can learn about what happened in a universe next door.

The Open Gallery
An assassin takes on the job of his life.