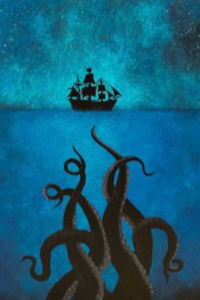 “No tales for dead men,” is a historical-action-seafaring novel about a pirate captain, Livie, who undergoes a voyage to receive compensation (gold) for a prior heroic deed that he didn’t even really mean to do. Things go wrong.

The writing is reminiscent of eastern novels, being very segmented and onomatopoeia focused, so if you like that style, here’s something for you. Spelling and commas are basically on point and I found no major errors.

Livie as a character is likable and so are the other side characters we have met so far, to different extents. They’re likable as characters, but it’s not easy to be sympathetic with all of them haha, but that's the point.

All in all, if you’ve got a pirate itch that needs to be scratched, you should give this one a fair shot! =) 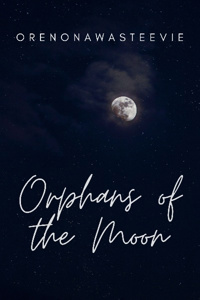 Real talk, it needs a little polishing. But this story was rated as 0.5/5 and I don’t think that that’s acceptable at all. I think that there's a good idea buried here which shouldn't be forgotten. The story follows Arte, a former noble returning from war and the developments thereafter.

There is clearly effort and intent put into this work. The writing feels like it follows the style of eastern novels, if you are familiar with the genre. I'm not a fan of the methodology personally, but there are worse things around here to read. Currently, there are only two chapters, as it seems that for now, the author has put this story on hold in order to focus their efforts on their other story.

I just want you to know that I’ll read more, if you write more, author. Keep the faith! =) 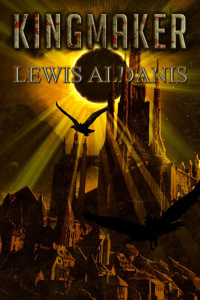 “Kingmaker,” is a dark fantasy-action-intrigue story about Thael, a now retired member of the Wraiths, a ‘cloak and dagger’ organization that serves the Arcadian Empire. Thael is rather suddenly pulled out of retirement for ‘one last job’, after the prince of the empire is kidnapped for nefarious purposes and hidden away in the city of Dres Laneith.

Thael is very much a grizzled veteran who just kind of wants to live out the last of his life on the mountain he has retreated to after ‘getting out. The story has an interesting magic system if you’re interested in magic-mechanics like that. As a reader, I wouldc certainly like to see Thael more fleshed out, right now he seems a little too archetypical.

The writing holds up pretty well and the story seems to have gotten multiple checks after the reviews here have been posted, as I didn’t find much of anything that was out of place. The chapters have a good length and the prose has a smooth enough flow. Scenery and world-building are strong suits of the author, especially chapter one, which offers a really strong hook right from the start.

Things got darker than I expected in the ‘flashback’ chapters and I feel like there wasn’t much warning. It all kind of made me a bit icky, but it’s a story and sometimes stories have to do exactly that, so, fair game.

All in all, if you are looking for a more grounded, dark-fantasy story, then please give this one a fair shot! =) 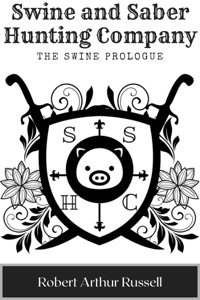 “Swine and Saber Hunting Company,” is a fantasy-action, almost-detective story about Oleander, a monster-hunter who takes on various small jobs regarding… well, monster-hunting. Character and scenic imagery is a very strong suit of the author and we really get a strong feeling of the MC as well as the other characters introduced during the chapters. Currently, there are only two chapters and the story updates every other week. But the chapters are pretty long to compensate. The writing is solid and I found no mistakes, especially regarding commas.

I’m really enjoying this one and the mystery vibe it has so far! =) 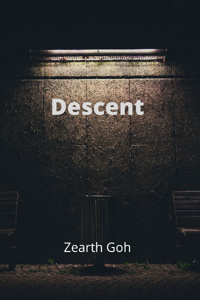 Descent is a gritty, soft-fantasy, story about two siblings on the run, (so far). There are only two chapters right now and the update schedule is limited at the moment, but for understandable reasons. The writing is solid, there aren’t any noticeable mistakes and the character dynamic between the two protagonists is interesting. Not a fan of the font, but that’s a personal issue which can be solved with a single click. World-setting is still undefined, but seems to be holding up.

These are still early days of course, but it looks promising! =) 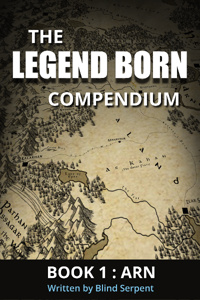 “Void & Flame,” is a fantasy story following the life of Arn, a young Ossarian man who essentially gets drafted to become a historian in the border town, far away from his home. The story has a very unique prose that lends itself well to descriptions of scenery and more importantly, the descriptions of characters.

This last part is a big factor, as the town that Arn gets sent to is very much ‘Innsmouthy’, if you’re familiar with the Cthulhu  mythos. Everything seems normal, but at the same time everyone is so dubiously suspicious that it was starting to make me paranoid while I was reading. Every side character, every interaction just always has that feeling that something isn’t quite right here. It’s like talking to someone who never blinks. There’s a creepiness to it that really adds up over every chapter.

As said before, the writing is fairly strong and stands well on its own. I found no noticeable grammar or spelling mistakes and the prose is fluid. Chapter one has a very strong hook in my opinion and it really caught me from the start.

The characters, as mentioned before, are all interesting to see. Even just the side-characters that only appear once, but a big part of this is because of how weird everyone is acting. They’re all just on the fringe of being overtly out of it. It’s like a whole town of fish-people pretending to be normal. This of course, offers a strong contrast to the confused village boy, Arn, who is very much out of place in a sense.

All in all, I’ve really enjoyed reading this story so far. If you’re looking for a low-combat, intrigue, fantasy story where something just isn’t right, then please give this one a fair shot! =) 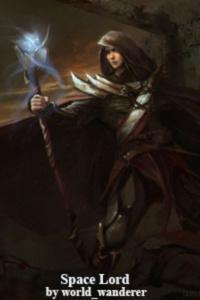 “Space Lord,” is a fantasy novel, focusing on Theo, an experienced, powerful caster who gets sent back in time to his early childhood after dying on the field of battle against the ‘big bad’ of the story. Theo decides that this time, he’s going to use his knowledge to take the wiser road and to do the things he couldn’t do right the first time around. This novel is clearly influenced by eastern novels, given the type of prose and systems used, whether you like that or not is of course, up to you.

What I always enjoy is when an author puts a glossary at the start of their stories, especially with these sort-of ‘cultivation’ novels that use a lot of web-work involving ranks and masteries. So I was happy to see that here as well.

The story itself has a really strong, heavy hook right in chapter one which really got me. The imagery is strong and while I’m not usually a fan of this type of prose, I found myself still reading on undisturbed by it. Chapter one really sets the mood for this story, there is a lot of fighting and combat, but also heavy, world-changing magic at play to counter the equally deviating threats.

The magic-system itself seems very intricate, so if you like that kind of stuff, I think you’ll enjoy this. Regarding grammar and spelling, I found nothing that screamed ‘wrong’ to me.

The characters are unique and separate from each other. We have the most screen-time with Theo, him being the MC of course, but he seems like a likable enough fellow all in all and it’s interesting watching the contrast between the ‘old experienced veteran’ that he was, now that he’s back in his childhood body and life.

All in all, if you are looking for an action and drama heavy fantasy novel, I think you’ll find something here for you. Please give it a fair shot! =) 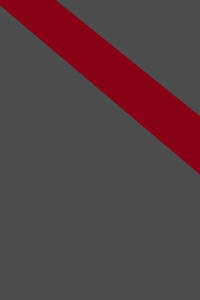 Give it a shot!

“What a mess,” is a dark, sort-of-kinda isekai story about five very different people who come together in the world of Lok, a world ruled by heavenly gods who are… dicks. The gods are just real pieces of work, honestly. But in a very interesting way. The story has a unique setting that is already detailed in chapter one and it gets you right into the very frustrating understanding of what exactly is going on in this almost hilariously terrible world.

The writing is clear and succinct, the author has strong prose and I found no noticeable spelling or grammar mistakes. The characters are diverse and interestingly tragic, Gregory is my favorite so far. But these are still early days and they haven’t really hooked up yet. So we haven't had any noticeable interaction between them to establish any sort of group dynamic.

All in all, a strong start and I would love to see more! =) 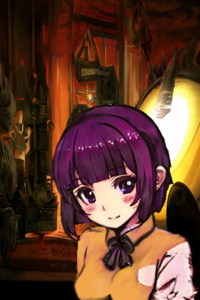 As of this review there is only one (1) chapter and there has been exactly that amount of chapters for over a month.

I want more. That’s why I’m here. Peer pressure. Are you reading this, author? I haven’t forgotten about your story.

As for you, dear reader, the story seems to begin, detailing the many lives of an unfortunate soul who dies over and over again before ever getting the chance to make something out of their latest incarnation, be it a cat, a dragon or just a normal human. These poor circumstances are all watched by a celestial-administrator, who I assume will be the one to springboard MC into a more successful direction as a living entity. 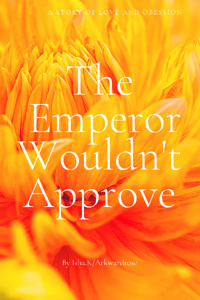 It is what it is

In all honesty, “The emperor wouldn’t approve,” is something I usually wouldn’t read. It’s a historical fantasy / nobility / girl’s love story that focuses on the life of Lady Sunny, a daughter of a high-born noble family who is forced to marry the emperor of Khiling, Kel. Kel is a bit of a dick, really. That’s all you need to know about him. Meanwhile, Sunny’s true feelings are for another woman of lower status, ‘Minny’.

While the story starts with the imprisonment of Lady Sunny, we quickly fall into a flashback of her younger years that leads us up to this happening.

You might notice that this story has a different writing style than most western novels and at first, I had assumed that this was a translated work. However, after some correspondence with the author, I have come to understand that this was a mistake on my own part and that this story was written deliberately in a fashion inspired by the prose commonly found in eastern novels. There is a bit of comma-work that still needs to be done, but the author has told me that they are in the process of editing as we speak!

The character dynamics are interesting enough. But a lot of them stick true to the tropes of old-world nobility, which I suppose makes sense, given the ‘tradition breaking’ nature of the story and its MC.

All in all, if you are a patient reader who is looking for a soft-romance story, then you might get a kick out of this one.

Please, give it a fair shot and make up your own mind! =)