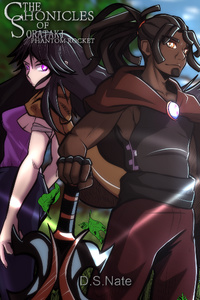 In a world that was almost kicked back to the stone ages, a power long forgotten returns once again. Countless unseen realms bridge themselves with ours bringing with it earth's second wind of ever change.

But alas, no matter the change, it is still man who is cruelest to man...
Losing her parents and turned into a lab rat by scientists, Natalie, now burdened with the powers of the divine interveners sets off into this bleak and ever-changing world to get revenge; this quest for vendetta however soon grows bigger than herself, when she crosses horns with a powerful and foreboding man who holds the same powers of divinity she was given.
As she and her childhood friend Andrew try to uncover the face of their enemies they are led to the rumors of the 'phantom rocket' by a pair of mysterious manipulators far from their western homes.
With the myth being as allusive their foreboding targets Natalie seeks to follow their lead in hopes that who she's looking for and who they might find are one and the same.
Now siding with the two manipulators they pinpoint the location on a map to where such a myth likely stemmed from. A long-abandoned bomb shelter some ways away from a humble village of Aqua falls.

For Andrew, however, this location hits a personal nerve, and for events yet known to the others; marks an eve of a great turning point in these four people's lives.