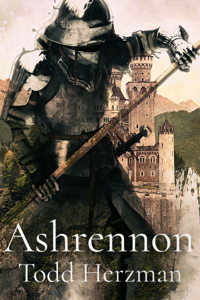 They aren’t allowed to walk the streets of Ashrennon free.

But they can see the truth behind people’s eyes.

When Rolland leaves the Lighttouched Academy for the first time in five years, he sees a truth he wasn’t supposed to, a truth that might get him killed.

Ashrennon is a coming of age epic fantasy about a city that hides its history, a people oppressed for their powers, and a boy who is forced to do the very thing he was never supposed to do—pick up a sword.