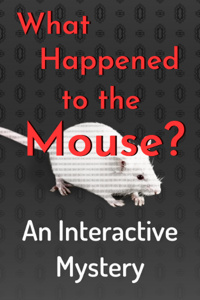 What Happened to the Mouse?
HIATUS
99 pages

Seven years ago, Maria's mother vanished, and she was taken in by her Uncle Johann, a reclusive inventor. Now she stands accused of her uncle's murder under circumstances that mirror her mother's disappearance: a locked room, a sole suspect, and a lab mouse that appeared seemingly out of nowhere.

As the building is locked down, a hard-nosed federal agent launches an investigation under a cloak of secrecy. Whatever Uncle Johann's latest invention does, it's dangerous enough to be locked away forever. And if Maria can't uncover the truth, she will meet the same fate.

In this interactive story, it is up to you to use your comments to study the clues, solve the riddles, and help Maria clear her name.

RELEASE SCHEDULE: One 1000-2000 word chapter is released every week on Monday. When a chapter is relatively low on interaction, a second chapter may be released mid-week to compensate.