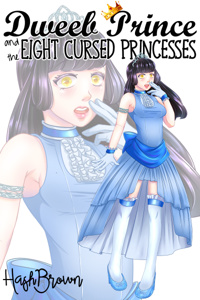 Prince, despite his name, was more of a dweeb high school student, who often spends his free time reading instead of socializing. One day, he discovered a secret section of the library, and in it was a mysterious book.
Then, his careless action of opening it unleashed eight curses of the different princesses living in the book. Those curse will jinx his fellow female schoolmates so each of them would suffer a tragic end.
But hope remains, in the form of a fairy called Pixie. Together, Prince and Pixie will track down each individual possessed by the curse and guide them to their story's happy conclusions instead of the tragic ones.

With that, Prince will have to deal with classic fairy tales such as Snow White, Cinderella, The Little Mermaid, and others in a modern setting.

Note: The 'HAREM' tag doesn't mean that the MC will explicitly enter a polygamous relationship with multiple girls. The tag was added because this story involves encountering and dealing with different girls without entering the dating relationship. So yeah, this is more like the harem tag in anime rather than the harem tag explained here in RR.

Releases a chapter every Sunday.