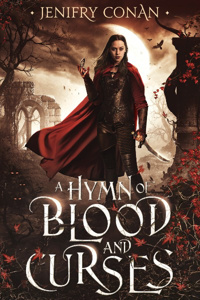 A Hymn of Blood and Curses
DROPPED
349 pages

We are the cure for death and the conservators of life...

Blood magery is extinct, but its remains haunt Esther on two fronts. On one hand, she is a conservator; an indentured servant who uses her visions of death to save other peoples’ lives. On the other, she’s a huntsman; a warrior hunter duty bound to eradicate the highly infectious blood-curse.

Esther keeps her two lives separate, but it isn’t long before they collide. In order to escape certain death, Esther must compete in the notoriously deadly huntsman's trials. But with her magic growing out of control and a fellow huntsman threatening to reveal all her secrets, will Esther reign supreme, or barely escape with her life?

A Hymn of Blood and Curses explores the struggles of dealing with PTSD and discrimination in a world where you're only safe within a city's walls. Mature themes including depictions of mental trauma, discrimination, gore, violence, and profanity.