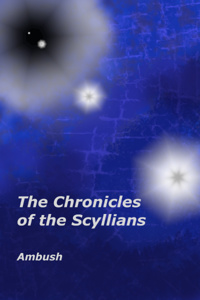 The Chronicles of the Scyllians
HIATUS
864 pages

Set in a fantasy world, the story features an ever-expanding cast of characters try to survive the trials and tribulations of Majin Academy: an academy that serves as a training ground for the next generation of mages, prioritizing practical training - and a school, an academy, that is willing to relinquish their centuries of power and influence to give the reins of control to the students. Students whose aim is to make their lives more interesting by their own hand in a school that for so long had guided their own towards society. And whose own have now taken it upon themselves to guide their fellows to more trials; trials accepted and sanctioned by those who want to see how far their own can prosper.

What fate will happen to those that try to take control?

And what fate will be pressed upon one who is taken for a ride, seemingly always in the center of the chaos?

This is their story.

WARNING: CANADIAN ALERT: UNITS OF MEASUREMENT AND SPELLING MAY NOT BE FOR THE FAINT OF HEART.

... Thereupon lies the folly of man; the taste of blood in one's mouth; the sweat glistening from their brow; all in search of a single, fragmented moment in time where they, themselves reign supreme, abandoning their morals to see to its final days-

"Muahaha! I'll take my throne again! Watch me! I'll be the best damned Demon Lord you ever did-"

"Shush, Mom's coming. And what happened to 'King' or 'Emperor'? And I killed you once already. Don't bother."

"Wah! Not fair! I still took you with me, you damned Hero!"

... This is a story of reincarnation with the successor to the demon king's throne and the hero who ended his reign. Will he conquer the world to live out his dream of power, or will the subtleties of life drag him off in a new direction - stay tuned!

Any ideas for a cover would be appreciated. Will pay in unfinished stories.

Mature +18[?] ------ Hiatus notice, I'll be rewriting this story heavily over the coming weeks. It isn't going where I wanted it to, bare with me for awhile. Ideally, a months time, but time will tell. ------ Andrew Marks, among over a million, 'players,' is forcibly recruited into a game where the reality and fiction interlace. Where the slightest error will spell death. For yourself, for your new found allies, or the world. 'Choices have consequences,' is a lesson the Corporation wishes to remind people. In this new world where many fall each and every day, a man simply tries to avoid it all, yet the world isn't so kind as to let him off so easily. -------- Chapters do tend to be on the longer side, well, in comparison to other fictions I've read on this site. Typically anywhere from 2500-4500 words depending on my mood at the time. In addition chapter releases are largely dependent on my mood so it should have at least two chapter released a week, however, I'll be busy for the next bit so it will be subject to change. -------- Anyways, please bare in mind this is the first creative writing piece I have created with the exception of a novel I started writing just prior to this one. I'd appreciate any help or guidance you may give me to better my writing. Be it characters, background or setting, I'm quite sure there are a few loopholes. This is intended for a mature audience, viewers discretion is advised. I digress, enjoy, rate, comment, and let me know how it's treating you so far! I'll take any help I can get!
View Page