Demons will stop at nothing to steal Harper Hawthorne’s magical nexus. They are hot on her tail, and she needs the help of the Afterlife supernatural crime-fighting team to save her life.

But can she really trust a vampire and his friends?

Under the flashing neon lights of Las Vegas, Harper is a normal woman. A bartender by trade, she meets many people every day, human and demon alike. Word has spread in the Las Vegas Underground that she is the owner of an heirloom that can grant a demon unrestrained power.

A team of supernatural demon slayers, hiding under the cover of their nightclub, Afterlife, find out about the demons’ plans and make it their mission to stop them. With the power of a fairy, charm of an incubus, strength of a shape-shifter, and wits of a vampire, Afterlife is in the only thing standing between these demons and a power that threatens to change the world. But do they have the strength to withstand the demonic forces? Can they stop them before it’s too late? 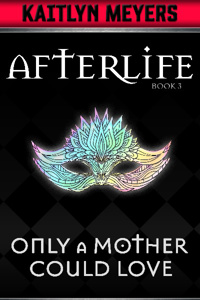 Afterlife Book 3: Only A Mother Could Love
HIATUS
0 pages

Book 3 of the Afterlife Series. Click here to read books 1 and 2!

Harper Hawthorne and her crew of supernatural vigilantes face another demon in the city of Las Vegas. This time, though, the target is an ethereal woman who lures men to their deaths by appearing to be stranded in the hot summer night.

But this latest demon isn’t the only threat facing the team. Loan sharks are on the loose. A dead woman must be avenged. The Afterlife team must control their anger. In this third installment of the Afterlife series, Harper must rush to stop one of her own before her rage consumes both her soul and the city alike.