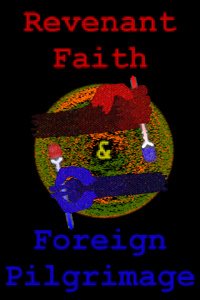 Eihks Richard is an edutainer between productions, when he and other citizens from the Parsed City-State of Rhaagm volunteer for a little poorly-justified charitable work. Ktsn Wdondf Daephod is a farmer dealing with family discord, when she and everyone she has ever known unwittingly benefit from philanthropy undertaken for the wrong reasons. The two of them come together, thanks to the involvement of a supernatural entity of strange and terrible power. Both break from their old lives, and forge a new one together as partners, to explore the wild unknown. It will be hard, and it will be interesting, and it will be both a journey and a revival.

Sebastio the Effulgent has been Lord of Pennat Gate for more than a hexadecade following the events of that day called the Western Sunrise. In the pyres that lament the many deaths of that tribulation, the place he has worked to turn into an asylum for the downtrodden has prospered. Some of the Yrdkish peerage, and some of those far removed from such status, disagree with Pennat Gate’s position, politics, and rulership. A few are not satisfied merely with seditious talk. A few possess frighteningly capable means with which to undermine causes of questionable nobility. A few want to see the experiment flourish, so that it might be ripped out roots and all. A fiery furnace awaits, and it hungers for both metal to shape and tinder to reduce to dust. When strange intelligent Beasts begin to appear on the lidar, they become the Toledo steel that will either straighten the extrafacetary territories’ spine, or leave it forever hunchbacked.

The Simulacrum of Dread
COMPLETED
335 pages

The entities known as the Beings of Old have long since staked claims to most of that gem-shaped manifold which is existence. Their alien, furtive, and impenetrably distant politicking has ebbed and flowed throughout past ages, beyond the awareness of most thinking creatures… and recently, it has begun to accelerate. For Sebastio Artaxerxes - and many civilians outside reality’s facets, especially in the transcendent city of Rhaagm - interest in such matters becomes far more pressing after a madman decides to claim a relic of one of the Olds. Sebastio’s demons tell him that fighting the man he once called friend will only end in tears. His soul tells him that tears are only shed by the living, and that the living at least may overcome regrets with time and effort.