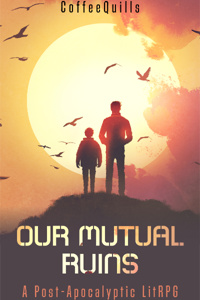 File under: many mutations, crunchy LitRPG, and settlement building

Testing games is Jinn's job. She's gone through everything at this point, from Seafoam (a slow-paced underwater simulation) to Admiral Kickass (friends-to-enemies pirate raiding) to Scrying in Space (spaceships with magic). Her newest assignment is to spend about two weeks in Our Mutual Ruins, a post-apocalyptic setting which is rumored to be based more on rebuilding civilization than survival in a harsh world.

Scavenging and checking nitty-gritty details for thirteen days sounds like fun after Pew Pew Purgatory (how someone can make a bullet hell boring is beyond her). And it is. Until she wakes up on the fourteenth day with a dead body lying beside her and the rules (as she knew them) altered.

The game was rigged from the start; good thing she has an Ace up her sleeves. 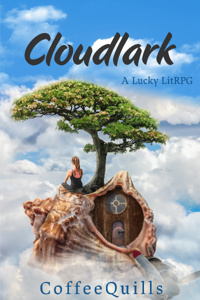 The problem isn't her, it's her folks. Seren is tired of living a lonely life on the island, but every time she brings up the lack of community to her parents, they tell her that it's better that way. Better not to have anyone else around. Better to have dad-vetted "friends" in touch only by mail. Better to not go near the transportation area and to report anything "strange."

And she tries. She really does. When it becomes crystal clear that nothing will change, the lure of far off horizons is louder than ever. The last straw is when an attempt to abide by the rules fails and even small pleasures are taken from her. Opportunity knocks and she throws open the door, determined to prove that she can take care of herself.

Too bad the world is just as determined to prove otherwise.