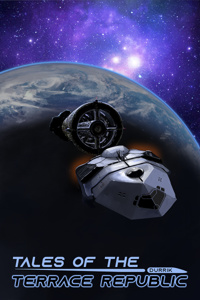 Good 'old military sci-fi that hits all the right beats

I'm writing this review as part of a swap, and frankly, I feel ashamed that I haven't found this novel sooner because it's a lot better than I expected at first glance.  Tales of the Terrace Republic is a nicely written military sci-fi and space opera, which focuses on Lieutenant Murphy's and his crew's adventures on board the Skate torpedo boat, and while I haven't read the whole thing yet, the book shows great promise. I certainly intend to finish this one!

Style: The story is told from a limited 3rd person perspective using multiple POVs, and I think the author nailed this part quite well. The POVs usually shift between the same three characters but we do get an insight into the perspectives of other characters and ships, which helps the reader to get a better understanding of the world and the happenings of the novel from lots of different sources. We also have a time and place stamp at the beginning of each scene, which helps us keep track of the happenings. There is also a glossary chapter that the reader can rely on if they forget a name or an abbreviation, which is certainly useful.

Story: I'd rather not spoil too much of the story so I'll keep this part brief. The main character, Murphy, gets reassigned by his superiors into the command seat of a small Torpedo boat in the middle of nowhere as a sort of an early retirement assignment, but instead of it being a relaxing and somewhat boring posting he ends up being part of a pirate hunt even before he manages to finish his training exercise with his new crew. It's a good story setup, albeit a somewhat slow one, and since a lot of the early chapters focus on setting up the world we're in and the characters, while explaining the workings of the ships during the training mission, we'll know what to expect by the time the real mission starts.

Characters: The MC is certainly in a very relatable situation and he's backstory is fleshed out quite nicely. The support cast is also good, though with all the crew onboard the Skate a few of them are bound to be mixed up or forgotten. The glossary helps mitigate this.

One detail that I appreciated is the emphasis on a character's homeworld and their varying physical appearance as a result. People from higher or lower gravity planets have vastly different bone structures, which affect not just their height, but also their endurance, their g-force tolerance and even their personality. I haven't seen many novels deal with this other than The Expanse series, so kudos to you, Author, for including it!

Grammar: Smooth as butter. Haven't seen any mistakes that would take away from the story, and even these were rare.

A rather fresh take on "magic" and powers, coupled with a fascinating world

I'd like to start off by saying that Myscretch was the first full novel that I read on RoyalRoad, and boy I couldn't have asked for a better introduction to the site.

The way the author translated common magical abilities and powers into the manipulation of scientific laws is both fascinating and fresh, and by the end of the story the reader gets a pretty clear idea about both the constructive and the destructive capabilities of these powers. The writing style and the grammar is also quite good, though there are typos here and there.

Unfortunately the novel suffers a bit from a few underdeveloped side characters, and generally the Myscrethians feel and look a tad bit too human. Story-wise it makes sense that they do, but I think the differences between the two people could have been explored more.

Overall though I had a great time with Myscreth, and I strongly recommend the book for any science fiction fans out there!