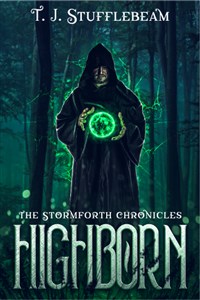 Highborn, the Guardians of Alluvion, have vanished from Alluvion. Destin, though physically weak possesses that very power of the Highborns, yet this forgotten knowledge was kept secret until a vision of another Highborn lead him into a journey to restore that lost magic in world, reawakening this lost power.

Guided by the help of his dwarven friend Goddar and Highborn Master Gideon, they will oppose the High King of Arthemis to empower the rebellion and again bring order to the land. An inheritor of the lost power, Destin has hidden his secret his entire life in his bid to remain alive. While his secret may be safe inside the prison camp of Vertrock, there’s no guarantee he’ll keep his life much longer. Physically weak but determined to survive, he quietly plots his escape.

The High King of Arthemis will do everything in his power to bury the knowledge of the Highborn once and for all. With a rebellion on the rise, Destin and his friends will have to rise above the obstacles in their path to bring balance once more to a war torn land.

However, his potential unlocks with the key of his belief.