So, early on in the process of writing The Shattered Heavens I was hit by a desire to commission concept art for some of the races and equipment featured in the main story.

I commissioned the Ukrainian artist Alfury, who has since discontinued his services due to the turmoil in his home country. I'm still in active contact with him and thankfully he continues to be safe and unharmed!

Without any further ado, here's some concept art and explanations! 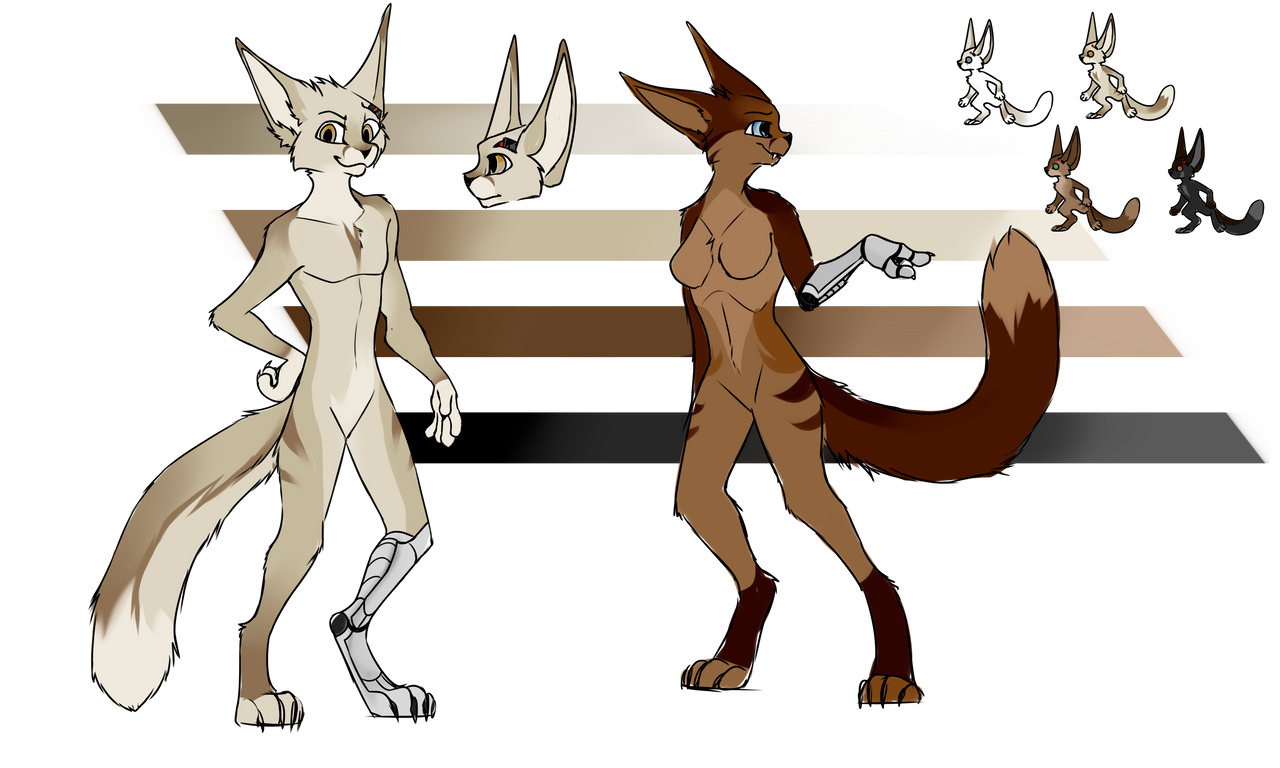 This is the original concept art for the alien race "Amaranthians" in The Shattered Heavens universe. It includes examples of their transorganic society; cybernetic limbs and replacements are commonplace and expected in order to counter the genetic failings of baseline Amaranthian physiology. The device over the temple is a Neurolink, which is a highly advanced cybernetic processor locally integrated into the brain of the augmented Amaranthian at birth; they typically serve as the housing unit for an augmented Amaranthian's DI (Digital Intelligence).

Amaranthians are genetically predisposed to being physically weak and have an average racial height of 5'5" (not including the ears). Without augmentations, a full-grown amaranthian will generally weigh something in the ballpark of 85lbs. However, within the Amaranthian Empire where augmentation is free and encouraged, the augmented average height has become closer to 5'9" and an average of 125lbs. 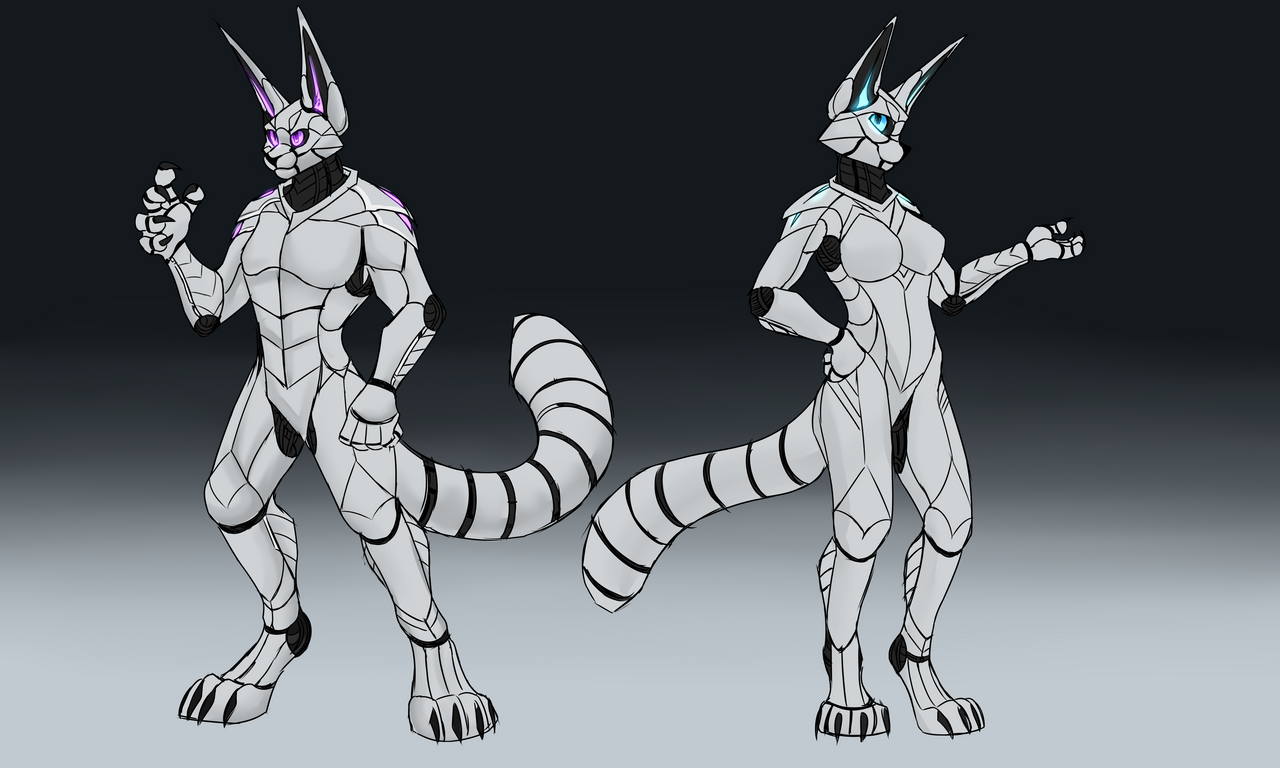 This, on the other hand, is the concept for Amaranthoids. When an Amaranthian gets too old, sick or injured, they are offered the opportunity for "Retirement". When an Amaranthian is Retired, they undergo a process wherein their consciousness is transferred into a superior machine body. A vast majority of Amaranthians fuse with their DIs at this point, becoming one entity with the shared knowledge, experience and wisdom of both.

Amaranthoids are the epitome of physical perfection in the eyes of Imperial amaranthians. They clock-in at 7'0" and 600lbs as a standard and are made of the same hyperdense alloy that the Royal Imperial Navy uses for their starships. Every amaranthoid is a combat unit by default, equipped with retractable titanium claws, built-in multidirectional thrusters, a host of sensor suites and a black-box storage unit for the mind contained within - making amaranthoids functionally immortal. 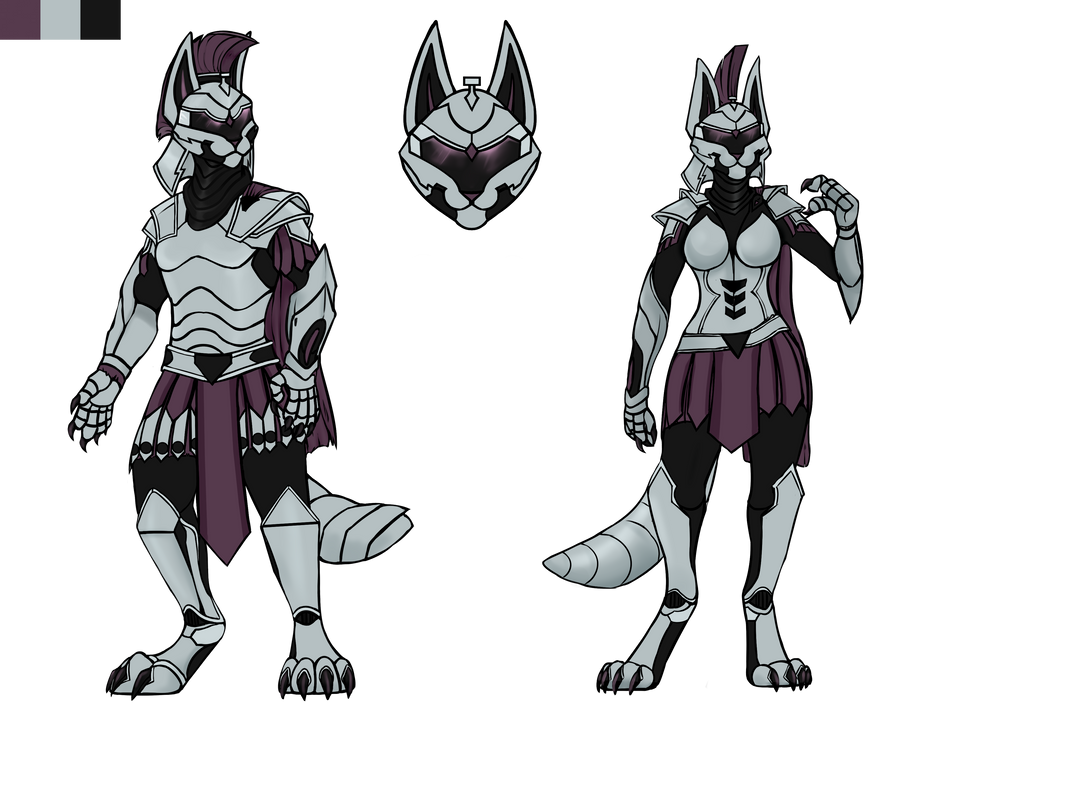 The Amaranthian Honour Guard, colloquially referred to as Guardians, are the Amaranthian Empire's uppermost martial echelon. They serve Empress Tiberius dutifully and are considered above and beyond the scope of Amaranthian politics. Peerless soldiers and political representatives without oversight or bureaucracy, Guardians are the face of the Empire itself and have the tremendous honour and burden that comes with such a position. Equipped with the unparalleled Artifice-28 Guardian Armour System and augmented with top-secret Neurolink wetware powerful enough to run a combat program that would make even the most grizzled veteran blush in shame, Guardians are a foe that few wish to encounter.

Guardian training is unique due to the fact that a Guardian's skill primarily comes from their augmentations. An upgraded cybernetic nervous system paired with a secondary metallic skeleton complete with industrial servomotor joints allows the Guardian's combat suite to circumvent the biological element altogether. Instead, a Guardian is trained in matters of politics and discipline; if a Guardian loses control of their combat suite, a single friendly fire incident would be considered a best-case scenario. 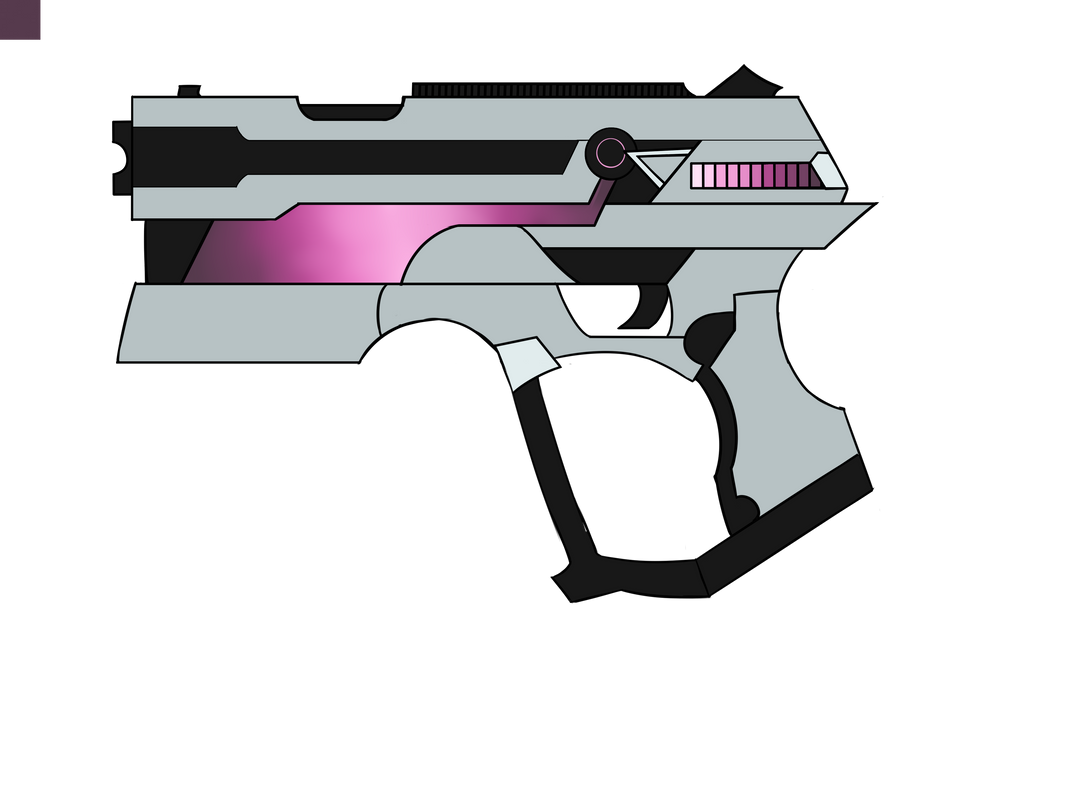 The A8 Plasma Pistol is the mainstay weapon of choice for anyone in the Royal Amaranthian Legions. Powered by a self-charging plasma recycler, the weapon is capable of firing accurate blasts of superheated plasma up to 500 meters away. At the ideal engagement range of under 100 meters, the A8 Plasma Pistol is capable of vaporizing most materials up to and including the tungsten-titanium alloy most commonly employed by the warforms of the Omni Animus.

Due to the Royal Amaranthian Legions' preference for lightweight, rapid warfare, they will generally forgo any weapons larger than the A8 unless it's a pitched engagement where they have no choice. The use of the A8 results in Legionaries not needing to carry heavy ammunition, spare magazines, replacement parts or cleaning kits, freeing up their carrying capacity for more important equipment. They also serve just as effectively within the vacuum of space, removing the need for additional EVA-compatible weaponry in their kit. 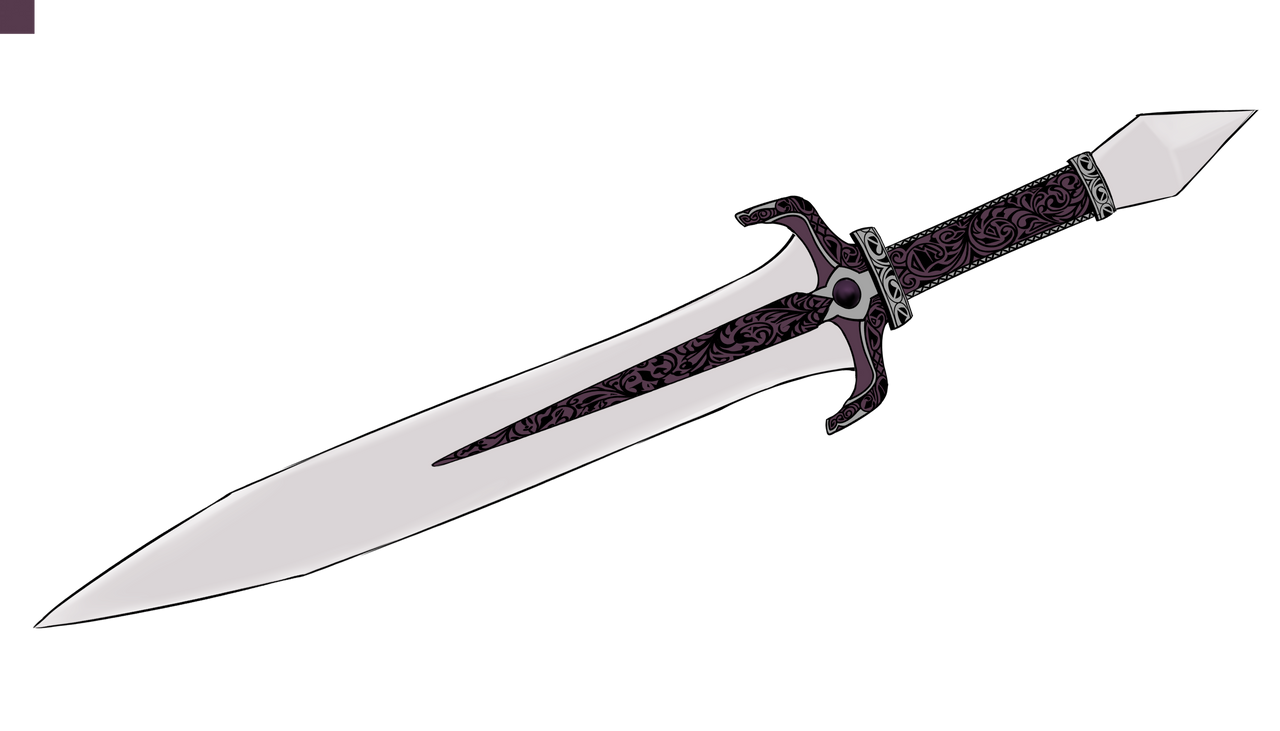 "Amarkai" is a term present in the Amaranthian lexicon that doesn't have a direct human equivalent. The closest translation would be "Family Blade" or "Namesake Tool", but even these aren't necessarily correct. What an Amarkai actually IS is a full tang shortsword, typically 60-120 cm long. The main material for the blade and tang is Tiberite, or "Nuclear Pasta"; the hyperdense crystalline material found within the crust of neutron stars. Because of the immense cost of procuring the materials for Amarkais, they are incomprehensibly valuable and rare, typically only found in the hands of an Amaranthian family's patron. They serve as a status symbol, and each one is unique to the family it belongs to. The one featured belongs to Octavia Tiberius, grand-niece of the Empress.

Amarkais are forged with a single nanometre of width along the blade, a sharpness which hardly if ever dulls. However, they are also incredibly heavy and generally require a heavily augmented amaranthian to wield properly. In the hands of a properly-trained swordsman, an amarkai can be more deadly in close quarters than any ranged weapon. But in the hands of the average amaranthian, an amarkai is simply a status symbol of incomprehensible value and significance. 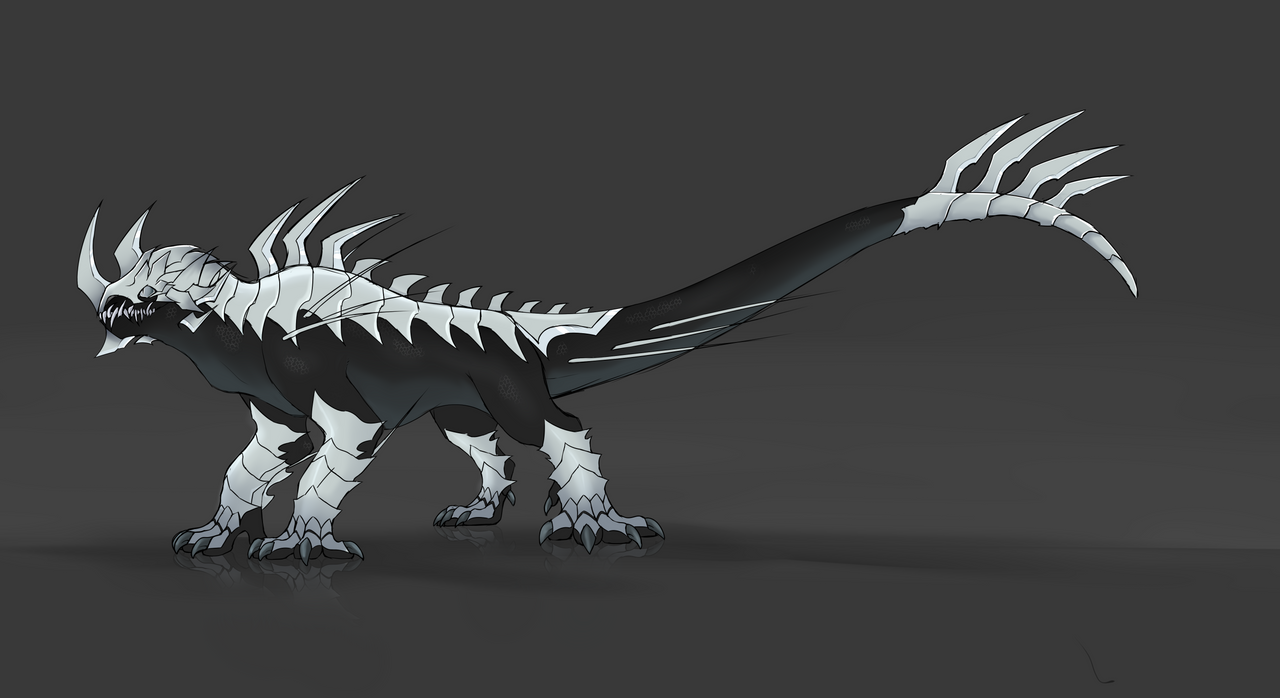 The Xaxar are a cruel, merciless race of galactic apex predators. They rose out of the dense jungles of their homeworld in primitive vessels in search of more prey to hunt, and in their hunt for ever-more-powerful prey they found themselves faced with the Startide Federation. The first contact wars were bloody and vicious; the xaxar possessed technology that was pathetic compared to the Federation, but that only served to force them to develop tactics to compensate for that. Many Federation veterans still have nightmares of xaxar boarding parties emerging from hollow industrial drills shot through space like torpedos.

The xaxar have no concept of gender and are all homogenous, allowing their birth rates to remain at soaring levels. They possess natural bone armour which is tough enough to deflect most small-arms fire, talons and claws sharp enough to tear through steel, and have an impeccable sense of sight and smell. They relish the hunt, and the only reason they stopped their grand hunt against the Federation was that a far more pressing threat interrupted them; the Omni Animus. 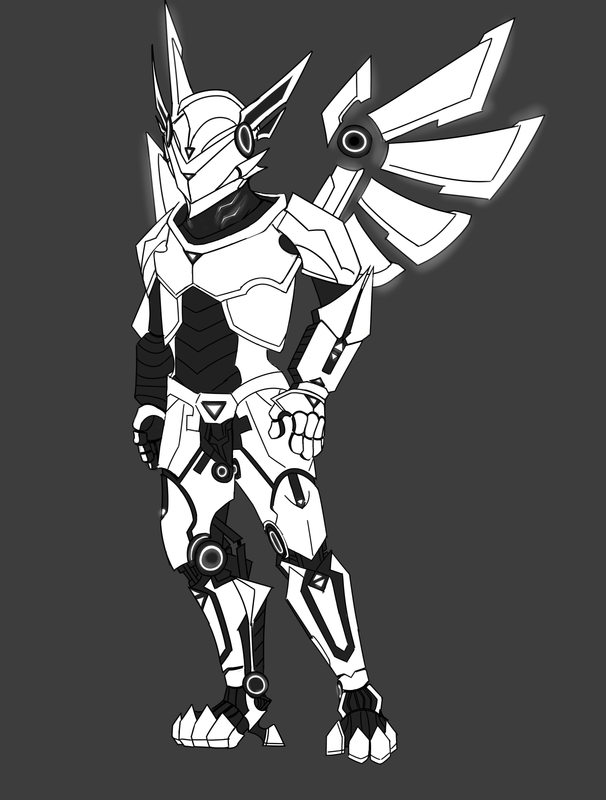 Finally, the Omni Animus's mainstay warform; the Omni Seraphim. The pinnacle evolution of Alpha-Pattern units; Seraphim are 10' tall and heavily armoured variants of the Omni build. Their wings have been upgraded with twin ion engines allowing for functional flight in space and in atmosphere. These armoured behemoths all have a direct link to the Omni network, providing them access to the machine hivemind, but they are all independent operators capable of logical thought and deductive reasoning. They are equipped with X-21 Suppression Rifles, a fully automatic smart gun tied directly to the Omni network, which fires "suppression shells".

The ammunition is a hollow titanium-alloy spike composed of two parts; an armour-piercing tip filled with hydrofluoric acid that bursts on contact, and a thermite core on a short fuse. After the rod impacts a solid surface the hydrofluoric acid burns away enough of the material beneath it to allow the rod to imbed itself in whatever the surface may be. Exactly one second after impact, the thermite core ignites, burning everything around the rod to 4,000 degrees Fahrenheit for twelve seconds.

#2 by parkertallan
What a great collection of characters and equipment. Having something like this will certainly enhance the reader's experience of your story.

#3 by Storyteller13
Thank you!!! If you're interested, The Shattered Heavens updates every Monday, Wednesday and Friday! ❤️❤️❤️

#4 by SigmaWriter
That is what I call an epic art showcase. 10/10, would definitely see it again.


Although personally, I would enjoy a bit less of f̸̡̡̡̡̨̢̧̡̨̢̧̧̢̢̛̥̝͓̲̱͎̞̦̼̩͇̞͖̖͓̩̤̭̭̹͙͚͖̣̪̪̜̣̝̞͖̘̝͚̫͕̹̞̹̠̥̘̫̫̝̺̲͇̯̩̗̹̬̱̯̥̮̬̳̮͕̭̯̻͔̬̮̲̟̻̝̣̰̻̲̭̣͇̩̩̪̹̖̜̹̟̥̹̙̦̘̖͎̱͚̹̝̙̯͎͖̭̐̌̈́̊̔͛͗̾̆͊̋͂̽̌̽̉̒͗̔͂͆̀̋̎̐̌̀̈́̏̏̊̒̉̾̽̏̈̏̀̅͋̆̌̑͂̂̀̈́̃͋̒͋͆̂̿͑͆͛̂̉̃̎͂͋́̓́͛̑̈̀̐̈͒́̀̌̀̂̈̉̓̅́̀͒͐̒̌̋̊̎̋̓̍͑͑̂͊̾̄͑̓͘̚̚̕̕͘͜͜͜͠͠͠͝͝͝͝͠͝͝͠ͅͅͅu̸̧̡̧̡͎̟͎̣̭̬̟̜̗̙͇̯͓̝̘͓̗̙̦̹̲̗̘̪̝̤̘͖͖̱̤̼̳̯̫̘͇̗̳̥͈̙͍͚̯̲̬̗͖͚̬͓͂̓̊̏̂̌́̃́͂͋̉̀̏̃̅̐̂̀͒̎̄̈́̍̍̏͜͜͜͜ͅr̷̢̨̛̛̛̛̛̭͎͇͚̰̠̗͓̪͇͔̠̞̣̪͖̤̩̯̯̞̯͖͔͚̼̙̣̬͖̫̞̬̝͇͙͙̟̙͇̦̖͌̏̂̈̋̊̓̊͛̀̅̔̄̋̌̈́̊́́̆̉͑̇͆͆̓͂̄͌̾̍͐̾͒̊̑͑̑́̿̅̿̇̀̾̾̏̂̐̾̽̐̄̂͌͐̎̋̏͑̋̇̅͑̓͑̑̿͋̆͛̅̎͆͗͋̃͛̓͆͑͌͗͒̎͑̈́̃̑̾͊̂̉̍̃͊̒̄͂̈̃͒̆̉̌̒͆͗̓̃͌̒̾̾͛͊̇̀̾̔̎̓̋̍͋̔̓̚̚͘̕͘͘̕̚̕̕͜͜͝͠͠͝͝͝͝͠͠͠͠ͅͅŗ̶̢̡̨̨̧̧̲̬̯̟̰͓͖̟̫̮̳͚̠̮͈̤͍̺̟̖̟͙̥̗̗̘͓̮͕̱̫̦̭̲̪̪͚̮̜̹̖̫̪̹̭̙̦̺̬̘͈͈͙̞̣̩̬̻̫͍̮͔͕͓̘̲̬̟̱̼̱̩͈̘̗͎̠͊͑͜y̷̨̡̡̨̨̨̨̡̧̡̧̡̡̡̨̢̛̛̛̹̠͚̩͖̖̫̭͓̟̼̥̦̭͇̦̖͎̬͙̻̲̞̻̩̳͍̜͚̞̰͇̬̩̰̞͉̖̣͉͉̻͍̱͖̹̞̮̰͉͓̗͖͇̻̙̤̗̘̩̰̹̜͓̻̲͕̥͈͖̪̲͉̺̰̭̹̖͍͈̭̖̳͈̖͖̩̣̱̝̬̯͕̩͎̪̙̠̻̟̺͉͙͓̯̞̦̠͔̫͈̼̙͓̺͎̙̣̪̼̤͓̖̳̏̾̒̋̔͗̅́͂͆̆̂͋̋̓̍̽̏͐̋̈́̍̆͆́͒͛̌̄̆̌͗͌͆̈̅̕̚͜͜͜͜͜͜͝͝͝ͅͅͅͅ, that is just my opinion.

#5 by Storyteller13
That's fair 🤣 but hey, they're just one race in the universe! They just happened to be the first ones to get their concept art before the artist was... let's say interrupted by geopolitical events 😅