#1 by Kamikoto
Absolutely shameless, the lot of you! Go ahead and shamelessly throw your fic onto this thread.

In fact, I shall join you. But I ain't so shameless that I'd persuade people to read, only throw it out there.

YOU! YOU'RE THE SHAMELESS ONE.

Now, go ahead. Throw your fic into the open...

Lmao why not. Read my fic pls pls pleaaase guys, link in sig

#3 by ArDeeBurger
Death crawls after Rio, trawling Pacific waters, searching for her beacon. She responds the way she always does. 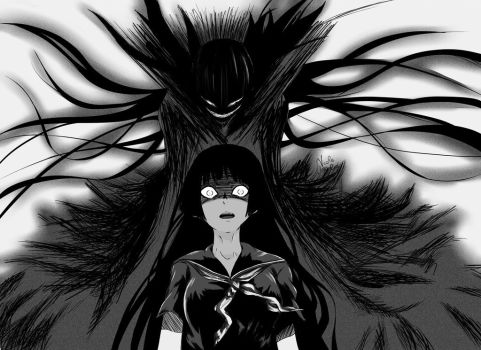 Run. Hide. Get away.

But she fears starting her life anew on another far-flung shore.

Using her mind, she visit a a city that beckons with the safety of a thousand searchlights. Maybe hundreds of thousands.

How can one person be so mighty?

It must be a trick. A scheme cooked up by Death to get her to run further. Still, if true, Death could never blacken so much pure white light. She packs the few things she still owns, having run so many times that her entire life now fits in a single suitcase.

She calls a nearby airport. "Konnichiwa? When is there a flight to the United States?"

DOTS - The Age of Enlightenment Has Begun

My story is entering its second part. It’s a D&D style adventure. With Part 1 done and the murder mystery solved, the Jellybeans, a group of traveling heroes consisting of:

A human monk, a wood elf ranger/rogue, a halfling ranger, a half-elf drow, a gnome cleric, and a high elf wizard.

Must now solve the problem of the cursed artifact that landed in their possession. The amulet begs to claim followers and unleash a terrible evil. Will they be able to seal it away? Can they destroy it? Or will it foolishly fall into the hands of a greater evil than its previous owner?

Saga of the Cosmic Heroes

Character-driven sci-fi space opera set in approximately the 29th century AD (or 3rd century UC) in a setting where humanity is united under an interstellar Federation past its zenith. The story follows a young Victoria Happ-Schwarzenberger through a first-person narrative as she follows in her father's footsteps and enlists in the Metropolitan Space Navy in events that will change her course forever.

The story also follows the cool Madame Scarface, a lieutenant serving under a bona fide pirate republic ruled by her ruthless adoptive father nestled in the outer hinges of Federation authority. Her narrative similarly follows her struggles that intertwines with Victoria.

May containTagsOther details:Almost done with volume one at over 150k words... well, 60% done or so.

#7 by chelsearaenavy
I guess I could join...

#8 by Kamikoto
Ohhh damn, some of you have some fantastic art! After i finish this VN i am playing I'm definitely gonna check all of your stuff put!

#9 by Elliot_Flanders
Not only am I shameless enough to plug my stories (see signature), I’ll even include a few review quotes and reader comments for bombastic effect:

Quote:The author has created a beautifully crafted world that draws the reader in with beautiful poetic paragraphs. Selena's Reign: The Golden Gryphon has been written with such grace that it can't be ignored. —Jack0fHeart, author of Arc: Survival Online
…you are a great writer my friend, in a few years we will be seeing books of yours inside libraries. —ForgetfulAtheist
Very well done, sir. —Mickey Fester, author of Kingdom Come

Quote:This is an incredibly unique concept with the AI writing! Good job :) —Nameless32, author of Precipice of Power
Wow. Talk about an intense writing and editing process. It is very encouraging to witness the behind-the-scenes material and see just how much a labor of love this is. —Yuuenchi, author of Under the Red Umbrella

#10 by Ariana Vivoni
Bow before me, fellow shameless authors! Here comes the Queen of self-promotions with her entourage of reviewers:

Quote:"The best way into a man's heart is through his wounds" Dick Benetton

Come and fall in love, but be prepared to fight some monsters for it!