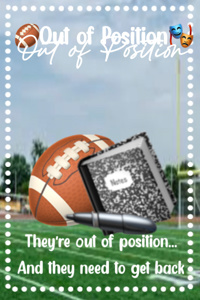 I go towards the football field. "Hey guys, where's the coach?" I ask, noticing the coach is not there. "He's not here today. Twisted ankle." One of my friends say. "We need to go to some club." Another friend says. "Okay..." I reply. We all walk in different directions. I find myslef walking toward the Drama Room. I walk in, the teacher greeting me with a smile. "Today we're doing a simple lesson in scripting!" The teacher announces. "I will choose a theme out of a hat and the following partners must make a script with it! keep in mind that the script must be short." he says after everyone takes their seats. He announces our names to pairs and gives us our theme and topic. "Jonas and Hela... somebody disappears in a horror film! Kaya and Layla... a fairy appears in a fantasy film!" I almost get a bit bored. But it's writing, and I'm fairly fond of writing things. I mean I have a secret journal for a reason. Totally not a diary... "And lastly, Luka and Aaron... unfortunately, the only paper I have left is A superhero fighting a villain. If this is hard for you then I can understand." he says. Wait. Aaron as in Aaron the drama kid?! He looks at me with a frightened face. After a second of silence, everybody goes to their work. Me and Aaron work in the corner of the stage. "So..." he says. "So, what?" I answer, annoyed. "Why'd you come here? Don't you have football?" he asks. "Nah, the coach is absent. I was gonna go to. different club, but... I guess I'm here now." I answer back. We go to writing the script. I wrote it on a loose leaf for fear that my friends and family will find out that I was with the drama kids. My dad and mom want me to be successful. They'll accept me for whatever I become, of course, but my sister will be making fun of me non-stop. That's what happened with soccer. And even mom agreed with her... "Okay. I'm done." Aaron says, stopping my train of thought. "Hold up a second, Shakespeare, I need to make one more sentance." I say. I can't help but notice his eyes as he takes off his sunglasses. Under then revealed eyes of a gorgeous green, reflecting off the bright orange lights on the stage, resulting in a brilliant shine. I couldn't help but stare in awe until he noticed. "Luka?" he said. "H-how do you know my name?!" I asked. "O-oh, u-um, I've seen it come up a bit on the school n-newspaper..." he says. Oh I remember! Our first game, I scored the winning point. It was a good day. "So, this is what I have.." I start, giving him my paper. "I like it!" he says after reading as he gave it back to me. "Thank you. I have a certain fondness for writing." And I have a certain fondness for you. My brain stupidly thought. Why the hell did I think that?! Don't know. I guess actually getting to know him was better then holding a grudge. Was it a feeling of relief? Prehaps. "Okay, now who's gonna be the villain and who's gonna be the hero?" I asked. "U-um, I think y-you should be the hero. I'll be the villain." he replied. "But don't go too fast, I can't f-fight well." he says. I nod in agreement. I can't fight too well either. I mean I know how to punch and all. We practice our lines, and end in the superhero beating the villain. By the time we need to present, my hands are shaking a little bit. "So is this how drama kids act when it's opening night?" I ask. "Yep, sorta." Aaron replies. "Look at me." I say. He looks at me, taking off his sunglasses once again, revealing beautiful green eyes. "You tell nobody of this. Got it? I don't need this coming back to the team." I ask. "My mouth is zipped." he replies making a movement to show him zipping his mouth shut. After preforming, the bell rings.

Luka was about to make his way to chemistry before being stopped by a boy with light brown hair, and a blue fade at the bottom. "H-hey, this was fun." Aaron says. "Yeah, it was." Luka admits before once again being stopped by the multicolor haired boy again. "U-um, w-we should do this a-again." he says, before quickly looking down." The football player thought for a moment. He wants to hang out?! "F-fine. But nobody can know." He agrees. Both boys end up smiling at each other. Something neither thought they would do. Is this really happening?! Is this a dream!? The dramatic young soul thought. Was he really becoming friends with the person he made into a laughing stock in middle school?! Some people walk past them. "So when do you wanna meet up?" the only slightly shorter boy said. "Wait you're hanging out with him?" one of the taller boys say. "What?! Hell no!!" Luka replied l, pushing Aaron to the ground. "Why were you there anyways." another boy asked. "Dunno." Luka said. He looked back at the boy on the ground. "I told you that you'd regret it." he said leaving the boy almost in tears. Guess I was wrong. He said to himself, before going over to his next class.

Holy crap... poor Aaron... He just got pushed to the ground by somebody he thought was a new good friend! Well, maybe they'll make up in the next chapter...

Bio: Hi! I am Faded_rosesgacha! Me and my friends on discord make stories about Wonderend on here! I make original stories as well! Please consider following! Thank you!
(Pfp art by me)