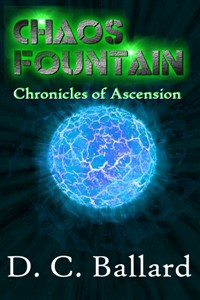 The story of Kyle Durlow and how he goes from Joe Nobody, to anything but. All because of a chance encounter on the streets of San Diego. From simply trying to convince himself that it was all some elaborate prank; to being convinced that this world he finds himself in was as real as the bank account his ex-girlfriend emptied for him. Kyle finds himself a fugitive from intergalactic justice, first running, and then turning the fight back on them. The Chaos Fountain is written from his perspective as he tries to get a handled on all he has been through, and what he has become after accepting the seemingly innocuous offer of a beer.

A chance encounter on the streets of San Diego rockets Kyle into a world where titans of industry have business meetings with gods, and he is dragged along for the ride.

Quickly learning that not only are we not alone in the universe, but it is a far larger, more dangerous, weird, and wonderful place than even our worst nightmares dare consider. Kyle is set, like it or not, on a path where his choices will alter the direction of not just his own life, but the destiny of the Earth, Humanity, and the very Universe itself.

He finds love, adventure, new friends, death defying escapes, world shattering revelations about ancient universe spanning wars lost to forgotten histories, and a job unlike anything he could have imagined.

Presented with the opportunity to stay in this world where any world, even time itself could be at his fingertips. Kyle grabs the chance, and he is still not certain if that is the right decision.

Very reminiscent of Douglas Adams "Hichhikers Guide to the Galaxy". Only 8 chapters in and I've been hooked by it's twisted sense of reality and humor. The characters have depth, the spelling and sentences structure are above avrage, and the story drew me in almost from the start. I look forward to your future endeavors!

I began the story hoping for a touch of humour and engaging characters after reading a review that compared this to the Hitchiker's Guide by Douglas Adams. I got as far as Joe's Bar. The dialog limped along clumsily, the characters were unlikable and too incoherently sketched to arouse interest, and I kept wishing there were fewer words to wade through. On the positive side, the grammar is not as bad as we often see on RRL. But that's not enough to keep me reading.

Glad i tried it

A really good story, the "Hichhikers Guide to the Galaxy" are definitly there, one of the best sci-fi story on this site hand down ! And the mc is one of the few that i can follow without asking why this or why that so yeah, good.

It's somewhat like the Hitchhikers Guide to the Galaxy, except with a protagonist that is substantially more competent, and spends less time gibbering in the corner.

It's a good story. Read it.