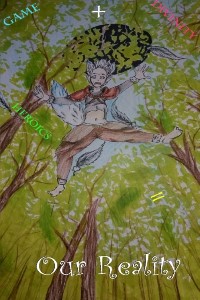 Our Chaoz; Our Reality (Completed)

Everyone has their own reasons, be it past events, personality or simply company.

But most at some point divulge themselves into videogaming, be it for entertainment or more compettitive reasons.

In this year and age there are many genres of gaming, one specific genre though still holds on tight to the ledge it was pushed to trying to pull itself back up. MMORPGs were once the top of everybody's list, adventure, combat, storytelling and endless grind in one single game. It was a different life for most, as if a parallel world to our own.

You could be a knight indulging yourself in combat, a mage expertly crafting spells of mass destruction or creation. A ranger exploring the land and hunting down prey, an assassin completing contracts and hording the spoils. A troll scamming children out of their hard earned 10 gold and making more hardcore players rage quit for the day.

Kyle is a roleplayer, one who enjoys the simple parts of this virtual life. Whether his guild was starting a war or ending one he'd always have his drammatic entrence or exit, his decleration of annihalition or demand of surrender.

After all that? He divulged himself in the game's story, the interaction with NPCS (Non Player Characters) and their advanced AI.

He went through many questlines, many tales of heroics and many more adventurers of legend but one thing always remained true with his character.

Kyle absolutely loved to the play the villain.

But when game turns reality, what will he and his guild of twisted personalities do?

Style: Doesn't add or subtract anything to the story. Could be better, but there's nothing wrong with it.

Grammar: A few mistakes that seem to be caused by laziness rather than a lack of understanding. Typos/mispelled words, over use of '...' and unnecessary parenthesis.

Character: The strongest part of this story are the characters. There are quite a few unique, interesting and crazy characters. On top of that, many of them contribute to the guild's goal. This is way more interesting to read than a one man army where the MC does everything. However, sometimes they act like an anime trope character, which is why I removed one star.

Story: At first, the author did a great spin on the overused stuck in a game plot and I hoped that the rest of the story would be just as creative. Everything goes downhill from there and turns into a cliche anime plot. The story reminds me of one of those really lame animes where everyone randomly receives free power-ups and the main character uses his emotions to overcome his enemies. This makes the story very unbelievable.

Saving the world plots are very difficult to write well. Most of the time they end up being boring, cliche or both. I don't understand why people seem to think that if their characters aren't saving the world, they aren't interesting to read about. I would have found the story a lot more enjoyable if the author didn't reveal everything all at once.

Conclusion: Would have been better if the pace were slowed down. Let the MC explore the world and learn about what's going on, then have him work towards saving the day or whatever else. It's like playing a game of cards with someone and they decide to show you their entire hand. There is no tension or mystery. There is nothing to discover or look forward to because too much was revealed at once. I think many of the problems are caused by the authors pace in writing so many chapters and lack of planning.

Don't normally leave reviews but this is so worth It! The characters have depth, Good and evil mean little everything slightly grey! And best part nothing is predictable!

I found that the start of this story is confusing and it takes a while to get good but the story and plot get better as it goes on. There are some confusing areas and some odd leaps in the story but this is one of the better ones on this site.

The characters are more what would be expected if this was just a game and not an actual world. They have no quarms about killing in any way despite knowing its real, but from the hints of the groups backstories it isn't too far out of imagining.

my opinion means nothing but I enjoy it.

This is just me saying I enjoy it not even really a review sorry.

[Devour], plot armor is fine but not this kind.

*From Chapter 52*
Fluent English, seemingly rare on rrl, crafing a second world within a huge universe, with characters who have their own, conflicting, aligning personalities, goals, wants, and beliefs. This story feels like trying to view the world through a camera on wheels, showing only the view of a single, tiny guild within what seems to be an entirely thought-out and well-designed multiverse.
Characters mentioned in previous chapters will reappear, reasonably stronger, but neither unreasonably weak. They come with all the developments you would expect from the main characters, even though we only see them briefly.
I am not a smart man, and my brain has fried trying to analyse the story to help promote it into the glory it should hold. This story is on par with the best of RRL.

It started great and promising but soon lost the same drive as the start, the storyline plateaued and stalled. The characters and their dialogue only continued to get worse, this was a promising story that was terribly, terribly executed.

What everyone should consider putting in there list of books

This fiction is by far a amazing story with captivating characters, story, and above all else creativity.

The characters are what you would expect if you were talking to someone you knew. That's how alive these characters are and how great of a job the author has done in creating them.

The story in this has a great deal of thought put into it, as it should. It's just jaw-dropping how good of a story this is, the plot is quite intriguing AT THE LEAST.

The fight/action scenes are very well put together and actually make you feel like a bystander on the side.

The author has done an amazing job with this fiction and I hope he continues this with all his effort.

Read all I love this novel

He make an immersive asf story one we're u want to binge read then when u get caught up u have to wait for a new Chapter when u want it now :)

and you are using the mmorpg genre still. I know theres some games that go "back to their roots" but this kind of takes that a bit too far.