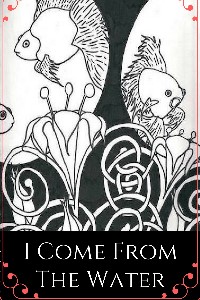 I Come From The Water

Mor is a mermaid, but not one of those lovey dovey kinds that you hear about all over the place. No she is a real Mermaid. One that kills and eats people, lures humans to their death, and laughs while watching. Unfortunatly for her, on a much needed day off, she ended up going to another world.

(Do to reading one to many LN I have decided to write my own. This is my take on a cléche world transfer novel.

Also I have a website with my books on it if you wish to read it there: https://localleaderkaz.wordpress.com/

P.S. All work is copy write of me. Please don’t take it.

P.S.S. There is a Yuri character who has a crush on the main... no action though)

But... the fact that Mor can't communicate to the others would normally be something that only goes on for a couple of chapters but right now it's getting a little played out.

I'm not Good at giving reviews but I'll try.

The story is Good, it's a Bit Different from other reincarnated/transported to another world stories that I've read, this one got no annoying magic elements that make it the same like any other fantasy stories after all. so I feel like this story is going to be more interesting in the upcoming chapters, so I would like you to give it a go.

Next is Grammar, I can't say it's Bad, Can't say it's good either, its more like it's Readable. There might be some Errors too, but i cant help and point it out on the comment sec because I have to do a few "whatever Steps" to send a comment.

And Lastly Characters, when Gram Conner(did I got his name right? I forgot🙏✌) got himself introduced Amice Didn't feel much suspicious on him and more like "You got taken and blah blah blah... You poor thing" Like that. It would be better if she's cautious with him and try to pry what's he up to if he's going to tag with them. But Thanks to mor she's not like amice and always had her guard up.

And Don't Go missing or went Hiatus, Okay? I'm tired trying to find a good story with a female MC.

Keep the Story and Chapters Up, Thanks.

The story is good and it is well written so it is easy to follow with only a few spelling mistakes. I think that the characters while fairly shallow for now have a lot of potential and I think that this story has potential to be very interesting longterm and I am looking forward to the future of the story.

Entertaining, but that grammar ...

There's frequent POV changes to show what others think about certain actions and while I find that method a bit 'cheap' to convey this, it's not like it doesn't work, so that's OK too.

Barely tolerable for me. Just right at the border where I'd usually be saying 'this is unreadable' and go read something else.

Tenses: lots of mixed up between past and present tense. Without actually checking I couldn't even say whether it was meant to be told in one or the other.

Words: lots of mix-ups. Some were quite fun (who knew that misquotes where annoying, bloodsucking insects? Hopefully they had an anecdote ready for any disease they transmit ....). Also oddly consistent: provinces are always provence. So the story takes place in France?

I feel a huge portion of this issue just could be solved by reading the chapters once more very slowly, sentence by sentence, and fix the biggest problems. So it's a shame that's not done.

A mermaid from future Earth (I think) gets transported to a parallel-universe Earth that's more medieval. Essentially she wants to go back, although it's not entirely clear why (but I guess she can just randomly feel that way).

She soon meets a tag-along, and then another one, and then suddenly they are mixed up in the usual evil Church business.

There isn't much in terms of depth or twists, but it's entertaining nonetheless.

Probably the biggest strength of the novel. I can't even decide whether the human-eating mermaid or her obsessed side-kick who apparently tried to save 900+ people and failed every single time (and is wanted in multiple proven...provinces but doesn't seem to care about that at all) is more interesting and fun to watch.

There isn't much spot light on any other characters, but the ones we meet are perfectly fine.

It's fast-paced fun, despite the grammatical issues. But I wish those were dealt with so I could concentrate on enjoying the adventure better.

its a new thing

its not bad at all, and characters seem interesting, but sometimes you'd probably want to get someone to just check your spelling, constantly throughout the novel you'd come upon mispelled words.
Its still worth reading.