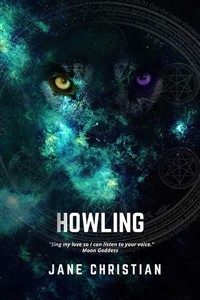 Tila Leo woke up in an unfamiliar setting where her life is thrown upside down. She is cast into the future in a body that she never expected to ever believed even existed: a werewolf body. From this new life, she is given things that she never expected to get. An annoying werewolf spirit that constantly annoys her, and a jackass of an Alpha that is supposed to be her so called  ‘Soulmate’, who rejected the former body tenant Kimberly Li.

Even still Tila doesn’t care. She wants nothing to do with this ‘mate’ business, and  instead she’s glad that he did. This is her adventure, where she’ll pave her own future and her destiny.

(Short Novel 36 chapters plus conclusion. Not a series)

The story is great the writing is not. The clumsy formulations of sentences and the sometimes forgotten grammar are scattered throughout the story leading to some dissatisfaction and knowledge that this could be better.

For the time span the author needed to write this wondeful piece(ca.2 months) it is well written short story.

Grammar: small mistakes(spelling or a useless word, because the author rewrote part of the sentence and forgot to delete it), nothing that makes you stop and think about the sentence you just read.

Style: fluid read, no jump. She is able to weave explanations into the story without interrupting it or creating chapters for it. I can only compare it to many of the best and favourite stories I have read on this site.

Characters: Strong female main character, well fleshed out. Most other characters lack a bit of background, which is due to how fast it is written. Character behave in a 'constant' way, nothing absurd.

Story: Well...It's a love story, more or less, but most of the time it isn't the main focus, it just kind of happens. And the way it happens is a slow progress and therefor fine.
Story progression is only once interrupted with a sudden 6 year time skip.

All in all: You should read it.

what to say..
I loved the story, I like the MC, the other characters ..
It is a verry good job.
I love as much as Black Moon (which will continue, I hope ^^)

The story is good, though slightly predictable. The romance is alright and not cringy. There's a sudden timeskip at a point, and might be a bit out of nowhere.

The style is alright, with the pacing set at a slightly fast pace with lots of action but also having some slow parts. That helped immensely toward the immersion, as too much action or too much slow bits can tire a reader out.

The grammar is the main issue here. It has the wrong spelling for 80% of the words like using 'your' instead of 'you're' or using 'their' instead of 'they're'. Small but numerous mistakes like that. There are also quite a few awkward wordings that take some re-reading to figure out the meaning.

The characters are pretty good, with the MC fleshed out. I can't say the same for the side characters, but they're fleshed enough to not feel too 2D. This story also uses the 'devilish man who is henpecked by his wife' trope, and surprisingly, it fits this story not too bad.

Overall, this story is worth a read and I look forward to a sequel if there is one.

**I'm not an expert here so I can't really give technical reviews. These are just my opinions, and completely based on my preferences.**

The story was written okay. There are grammatical errors and names being mixed up, but I don't find it disturbing to not understand and enjoy the story.

I admit, there are parts of the story that I can't understand/connect but maybe I missed reading the explanations for these parts 'cause I skipped some paragraphs that has no dialogues (sorry author! I was so hooked that I cannot put it down but I needed to finish it soon to do other things). But still, it's enjoyable, and I was surprised with the progression of the story.

As usual, I love stories with bad ass female protagonists. Wish we had a chance to glimpse more of Adam's story 😉.

I can say, it's a job well done snowangel12. Thank you for creating this piece and for sharing your talent and creativity with us. 😍