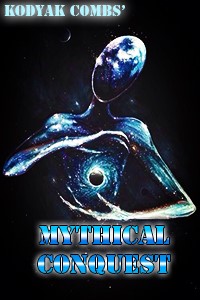 *THIS STORY HAS BEEN REWRITTEN AND WONT CONTINUE HERE! USE THE LINK BELOW FOR THE NEW & IMPROVED VERSION!*

Because of certain events in his past, Logan Cross isolated himself and did everything possible not to stand out.

This is despite possessing a body and mind that far surpassed the normal human.

One day when taking his normal route home, through the back alleys, Logan was caught up in an incident that led to him killing a group of men before dying himself.

Now finding himself in complete darkness, Logan was offered a second chance at life by the dragon goddess Tiamat. To which he replied:

"No thanks. Just make me a panda or something. They have it easy."

Tiamat of course denied his wish, and plunged him in a world where every being of myth not only exists, but they even choose champions called Proxies to represent them in a war that decides who rules the world!

This is a story about a boy who made it his lifetime goal to eradicate the gods!

Watch as he slay gods, demons, heroes, and beasts; and become the Ultimate Evil!

You tend to overly emphasize the flashbacks that it tends to trail off the storyline which was supposed to be the story of the MC's conquest.  Darius' flashback which gives rise to nothing on the future aspect of the story, Luka's "backstory" where it explains her drive to revenge, but it went entirely into a flashback of her parents.  There are other ways of telling it other than making it so detailed they are a different arc or side story arc instead of a flashback, flashbacks are supposed to be short, concise, and quick, if you prolong it too much, it's probably connected to what the future holds, however in these two they're just there for explaining the drive of one heroine, and a SIDE villain.  If things won't change, then we'd have a flashback story of every villain and any character relevant to the MC at this point and it would be glaringly tiring or boring to the readers if it comes that way since story needs to be circled around one aspect, on this story, it's the aspect of conquest and the toppling of the gods, however, story's pacing is so slow due ot the fact that you basically jump from one character's view to another, showing what they are doing at the same time.  Person who chases two rabbits catches neither.  Having so many things moving simultaeneously, you won't be able to properly express the story to your readers that good.  Adding to the fact, you're also introducing new characters to what's to come all of a sudden, clans, factions, whatever, basically a clusterfuck of them when MC's current goal is to remove Darius, Dario, whatever name the king is on the current kingdom.

After reading up to ark 3 I'm really not sure what I think of this story, in general the idea is quite nice, but I'm really having trouble understanding/sympathizing with the MC his behavior just seems odd to me, it's not that I can't relate to dark/anti-hero characters it's just that I don't understand him really, his actions don't make much sense to me.

Thus I find it hard to feel excited about the story, it's not that it is bad it's more like it is not interesting enough, or that I don't feel invested in the characters. I'm not standing behind him with his goal, or eager to find out where his powers will go there is just no real drive for me to keep reading

Reviewed at: A Tyrant’s Anger

What can I say? Half the story I was frustrated with the amount of overly op characters thrown in the middle, other half I was frustrated with the amount of irrelevant flashbacks. Add to the fact the dues ex machina in earlier fight scenes and I'm forced to stop reading it. It was an interesting concept maybe a bit cliche but interesting still but the way story progressed left much to be desired. So final conclusion? Interesting concept, Bogus story.

Honestly, I'd say the only thing this story lacks is chapters. To be honest this has some of the best world building I've seen in a novel, its truly epic in scale. The fights are really well though out and I really like the abilities as many of them are unique. Now onto the mc, he is genuinely OP, but so are many other people which makes the story interesting. I especially love how he interacts with people and how he possesses that chaotic personality I love in anti-heros. Even better is that he was summoned by tiamat as a proxy, they have a bickering siblings kind of relationship despite her supposed to be acting like a (parent) and then her also possessing the same chaotic attitude which is extremely funny when she's partying or drinking. I also like the MC's resolve, as he is summoned by tiamat to be her proxy even though she doesn't particularly want to win, so he essentially decides to win the whole war for himself and become the supreme being instead of god, and tiamat just pretty much goes along for the ride happily. She's a tsun-dragon.

By the way, this review is written while I'm really tired so forgive me if it makes little to no sense

TL;DR: OK Story, mediocre character mediocre-bad grammar. Recommended for those not caring about a perfect English.

There aren't many chapters out yet so there really isn't enough out here for me to review properly, but I thought I'd leave this as both information and warning. The story and the world are nice enough, nothing really unique but good. The MC seems very... forced, just like the conversations between other characters.

But what made me stop reading this is the grammar and spelling. Again, the idea behind this is good, but you (the author) seriously need to re-write quite a few parts of the chapters you released until now.

Reader beware; you're likely to cut yourself on that edge.

Its a good story and i really like the MC. That said you should really put some headers in to tell whos point of veiw its in or the location and main people there or something. I know to most people this is not a big thing but to people that hates the view point changing its a big thing.  I would be reading and be really into the battle that is taking place and suddenly it goes to a diffrent battle. Alot of people are fine with this but i will skip until i find where the battle i was reading starts again and i MIGHT go back to see what i missed. This is not as easly done with no headers and i have dropped many books and novels for it out of irritation. I know i am in the minority that have that big of a problem with it but its a very easy fix that could keep the few people that have that much of a problem with it reading.

Story is ok as far as wish-fulfilment fictions go .  Grammar is not terrible.  I'm sure plenty like it.  Honestly though, its just not for me.

Its the flashbacks.  Frustrating.  They are well written, arguably even better than the main story.  But they throw off the rythm.  And take up to much of the story itself.  I mean it feels like a third of the story so far is all flashbacks.  If the pattern keeps up they'll be more every time an important girl is introduced.

Anyway, story itself isn't bad.  If you don't have a problem with flashbacks or wish-fulfilment stories you'll probably like it.

Grammar mistakes breaking the flow are the least of the problems. I just finished reading a 12 chapter flashback, for one of the side characters. and it wasn't even really about them, but instead about their dead parents, who they never knew. All I got from 100+ pages was that she's a cambion, and hunted because of her mother spurning the king. I don't need the full details of everything that happened and it didn't help the story whatsoever. It just wasted my time.

Has issues with pacing.

Some people stopped reading because there was too much time invested in flashbacks, others because of objectionable content. As for myself I'd say the primary issue is that the author spends so much time on world-building that they neglected to provide a reason for us to care. So much time is spent powering up characters and explaining what that entails, but there's little interpersonal chemistry, no real threats, no tension, and events take place wherein the MC should be out of his depth but he always finds a way to power up to match the threat and training resumes as always. Maybe it gets better, I got about 1/4 through what currently exists so there's certainly room, but I can't bring myself to care enough to find out.