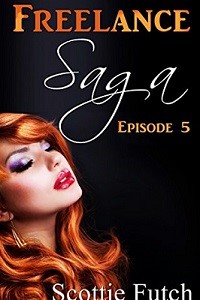 What would you do if you were given the chance to do something extraordinary? What if a world existed where life was a game? You could gain levels, fight monsters, and get into sexy situations. You could become a truly powerful person.

Would you take up the call to explore this brave new frontier, or give up on the adventure of a lifetime?

Scott Hunter made his choice, and life is about to get sexy.

Freelance Saga: Learning Curves is the first episode in a series about a man who enters into a real-life fantasy world designed like a game. While it seemed perfectly normal, if highly advanced, at first, he soon learns that the world is a place filled with opportunities for developing both his strength and his perversity.

Scott Hunter, freelance monster trainer, is a new beta-tester for Alterra International. The relatively unknown corporation shares their secret, the ability to travel to a world where life is literally a game! Treating that reality like a virtual existence, Scott enters but soon discovers that things are far more real than he expected.

an obvious early work... but the premise of the story is good...

Damnit I already caught up.

Laughably, I'd say this is an Omniscott story, its all of the... I suppose, new scotts, bunched up into one chaotic unfocused mess, you have some of the blackthorne Psychological trauma, the Origin ARS Kindness, the Galataea post military activity...

Really I'd guess that this Scott was broken into pieces and refined for the other stories.

Its a pretty good read and I'd definitely be curious to see what comes next. Take my rating and continue writing Scott!

The main thing that sticks out to me, is that while you've said your MC is an experienced gamer, he is constantly suprised by every single game mechanic.  He's surprised by skill books, gaining skills, having to kill to gain exp, monster drops, being healed by hp regen, gaining exp doing quests ... In short, you have him acting like he's never even heard, much less played, an RPG.

I get wanting to show that he's in a new, confusing world, but you've taken it way too far.  New and confusing it may be, at it core, it's based on a game.  Weeks into it, he should be long passed being suprised.

Also, just a small issue with timekeeping ... Earlier the message your MC received said it would be 567 hours until the transfer protocol was fixed.  That's a bit over 23 1/2 days.  Later he says it's been 2 weeks, so in only a few days he can go home.  Your dropped a full week.

I liked galataea and I like this. The fact that the plot doesn't revolve around just capturing / saving as many girls is also a plus because there's different goals to strive for in this new world he has to explore.

Although I'm not technically a fan of the fact there's so many sexy-scenes I haven't felt the need to skip them either.

I like it so far only read first few.

Seems good so far. Will continue to read.

Insta follow and 5 star cause i love all his scotts

Loved the story wish for more

I was taking in by the concept in really enjoyed getting to know the Scott of the story. Is approach to getting to know the girls is fun and look forward to more character development as time goes on. Really enjoyed the story wish there was more to it. Loved the concept and the relationships being built.  I really hope to see him set up a kingdom. Guess I will make my way to another of your stories.