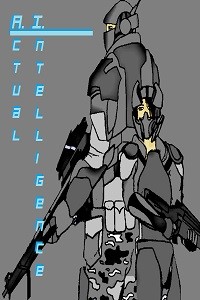 ok you got me thinking appleseed with just your openning discription and first chapter just FYI you are on danger ground just becareful unless you want to end up like icarus and have the haters and trolls burn you (that's how it goes in the story right?)

Story : A cyberpunk story not my type but this is well done better than a lot of the same genre in this site

Character: The best part the character building is good and we take time to discover the relationship betwen everyon

Grammar / style : Big block of text not english myself i need to breath a little between paragraph.

If you seek some Cyberpunk/mecha story take a look at this one.

Review up to Chapter 14

Okay, I have written a little TL;DR in the end, for those lazy people, nevetheless, here is the review.

Terminus keeps a pretty grounded style in wirtting, he sticks with only the viewpoints of his two main characters, which is perfectly fine since it helps you in getting a much clearer idea without much confusion.

The order of events are able to be followed and they are pretty straighforward, no confusing events added in between.

In my point of view, this is very short for a chapter, though there are some people that prefer smaller chapters.

Even then, I don't think that short chapters fit this story.

*A little note for those that use the dark theme, chapter 12 and up seem to have black colored text, which means that it will blend with the background, making light the only theme that is capable of reading them.

Ok, let's get the elephant out of the room first, the author separates paragraphs with a rather large space, something that is a little weird at first but you get accustomed to it eventually.

The grammar in the first 6 chapters or so is really great, nothing that really glares at you.

Starting from chapter 8 and above, grammar seems to take a massive dip in quality, although not unreadable, it does have some janky mistakes that could be easily solved with an editing run.

One of the best aspects of this story is its world, it manages to catch your attention and gets you intrigued.

The post-apocalyptic story with androids is something that has massive amounts of potential, literlly dripping from the sides, I hope the author can take advantage of this.

There are some weird things I found though that do take you a bit away from the story.

*Warning spoilers for events up to chapter 14*

[spoiler] Ariana and Blaine belong to the Western Coalition right? It seems a bit weird that they just up and left and went to Zion without much else.

I would love it of you explained a little bit more about the outside world, we have gotten descriptions of Zion, but not of what is out there.

I think Blaine and Adriana's relationship seems a tad bit forced, as if Blaine was pushed into this role because the story needed it, not because he naturally fit there. [/spoiler]

Ok, another big part of the story.

The main characters right now are interesting, they have their own motivations and troubles, and they feel human (as human as androids can be).

Blaine existencial problems are really interesting, Adriana coping with the situation is even more interesting, Theressa feels a little bit out of place and Artois feels just like a quest giver.

Though, it feels a little hard to understand Blaine without first getting to know Reese a little bit, we have no knowledge of Reese and therefore I can't really get the troubles this man has over himself.

Adriana on the other hand seems really interesting, having to deal with what she has to deal with, though she feels a bit bi-polar, always changing her point of view like a coin-flip.

Theressa feels a little awkward, she feels somehow out of touch with the world that Terminus has built, I can't really see her fitting in too well in the over-arching story with the exception of some mayor character development.

Artois feels a little bland, though this is understandable as he/she/it has only just been introduced.

NuNu is a character that adds a bit to Artoise's character, though I would like her individual personality explored more than just "he loves Blaine".

A story with great potential and great possibilities, dragged down by lack of polish and some weird things in the story.

I would recommend trying the story out, even if it has some flaws, it manages to be interesting and a good read.

Great Characters, Packaging Could Use Some Polish

For me, this story has some real high points and a few lows.

The high points for me are simply the two main characters, Ari and Blain. Especially when they are struggling with the tension of Blain being both her dead ex-husband, but also being his own unique self. Seeing this tension from different angles and exploring it more would keep me coming back for more.

The low points are just some easy to fix grammatical errors and a not believable enough plot. I struggled with their transition to Zion and understanding what the state of the world is. Why do they accept Zion so easily? I got the impression they were loners that would resent Zion, especially with the whole attempted drugging thing. Why are they shooting things and fighting before they get to Zion? What's their motivation/mandate?

On the whole, I enjoyed reading this story and am interested to see where Ari and Blain's adventures take them.

I love this it is a cyberpunk novel set in the not so distant future after world war 3. It is well written and really well thought out, also it is quite refreshing to not have a bricktagonist.  So if like me you are a little tired of reincarnation stories this is for you it's like a breath of fresh air.

This has far too much exposition for its own good. For example:

'This was one thing they disagreed on, Blain, saw himself as a different person, something new, even though he had all of Reese’s old memories he saw him as a donor, someone whose loss gave birth to him.  Ari on the other hand, couldn’t help but look at him and see Reese, he was Reese.  She even would have called him that had he let her, but at first he had only allowed her to address him as BL89E, and had finally given in to letting her call him Blain.'

Though this scenario is the most interesting aspect of the story, the way in which you simply tell the reader all about it instead of alluding to it through the actions of the characters robs the situation of a potentially subtle conflict of interests. If you've never heard of the writing rule 'Showing, don't tell', I highly suggest you research it. Your writing is plagued by exposition about Ari and Blain's world. Get rid of it.

As for the action scenes, I didn't understand why Blain had to make witty remarks during the fighting. This is fine for a superhero fights, but I get the feeling you're trying to go for a serious cyberpunk drama here, so the quips just take away from the realism. Read Neuromancer if you haven't already; its the originator of the cyberpunk genre and handles its action scenes very well.

Overall, just plain bad. There are so many mistakes that I can only assume that you yourself did not reread it. My advice to you is to read a grammar guide (preferably The Elements of Style by William Strunk Jr) and then go over everything again.

Also, why is every line so spaced apart? That's not normal for RoyalRoadL.

I think the relationship between Ari and Blain is the most interesting part of the story. It reminded me of an episode of Black Mirror and Nick Valentine from Fallout 4. Can Blain really be considered Reese? Was Ari wrong for creating him? These are intrigueing philisophical questions and you should do your best to explore them. Also, good use of a dream sequence to really cement Blain's opposing feelings on the matter.

That aside, I found the way Ari and Blain were approached by Tessia in her mech to be pretty unbeleivable.

Ari said it herself: “Some recruitment agent you are, first of all you came at us in full armor, without announcing your presence or intent,"

And why is the Collective sending so many of their people after Blain (I'm presuming they're after Blain)? Even if he is the only Bio Android with the memories of his past life entact, I don't think that would warrant the expense of a small army, no matter how much the Collective take issue with it. One or two assassins tops.

Isn't Zion from The Matrix? I don't think you can get away with nicking that considering The Matrix is such a big franchise.