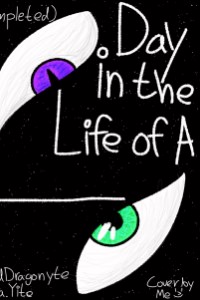 I HAVE FINISHED IT!!! HAHAHA

(Cover made by Palt)

alright, alright. the entire story is a rather interesting one with many twists and turns, but what weights the interesting story down is its execution. it focuses mainly on conversation - fun conversation, mind you - and kind of forgets what binds these conversations together. the characters were varied yet very alike, and I failed to notice any great nuance seperating them. sure, there were snakes and goblins and slimes and necromancers and killers, but their personalities were rather... same. now, ill have to confess, I commit the same mistake constantly of making the main character in the image of myself and therefore only creating one, but when you have as many characters as these, you'll have to cherrypick your traits. some of your humor there, some of your short temper there, so on, and so on. this way you'll have nuanced, realistic characters who you can still call your own.

the ending was a bit... I've only seen two stories who have been able to pull the "it was all a dream" trope well, and that was Alice In Wonderland and 1984. by "It was all a dream," I mean the trope where at the end the character wakes up and realized with a sigh of relief that it was all a dream, or, as in 1984's case, that everything that the book did and everything the characters tried and failed at was completely for nought. Winston died, not having changed a thing, O' Brian lived on to continue, the girl lived a few more years in the utilitarian dystopia, and in the end, the world did not change. a most depressing message that was executed well and with a great twist of the wrist that allowed one to slip into chronical depression without further ado.

however, this fiction did not succeed in this department and im sorry if I sound harsh.

the story ended with that around half of all those who died double-died, those whose bodies had been taken would be forced to continue, and really, everything didn't matter, or rather, it mattered just enough for one to think that it didn't matter enough. no realization came like being hit by a meteor as in the case of 1984, there was only a sense of "alright... now what?"

really, it felt hurried and stale. but I do appreciate the effort it took to finish it at all.

to the readers: if you want something simple, quick and fairly original, and you like isekai, this is for you. it's a fast read and you can finish quite a few chapters if you just give it a few minutes.