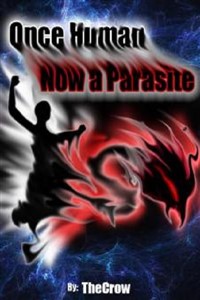 Once Human, Now a Parasite

Arthur, a Rich businessman was kidnapped and tortured for months by men his wife hired. After months of this hell, he was given a second chance, a new life in a different world and, of course, Arthur would rather start a new life than stay and continue to be tortured, so he accepted the deal that was proposed by a mysterious individual, but when he finally was reincarnated, Arthur discovered he was a..... parasite?

PS: This is not a novel about a kind MC, so read AT YOUR OWN RISK.

The level of hypocrisy is way too high in this novel....

"The only way he would lose all rationality and start a massacre is if someone dared to hurt Lucy, at that time, none would can wish to escape from his grasp as he will mercilessly kill them all"

The academy tried to kill not only him BUT ALSO HIS WIFE, LUCY! WHERE IS THE ANGER? Where is the towering killing intent?Not only is he not fucking angry after almost being killed and his wife almost killed but his personality improved??

Mary said "sorry" and he just let her fucking go? What? Someone was a part of the group that had the intention of killing him and Lucy but she is let off because she said sorry.... the stupidity is next level for real. Not only that but Mary even had the audacity to make requests when her life wasn't taken... (not to kill the headmistress).

He also went and apologised to the royal family of humanity, but they were the ones to provoke him, not once nor twice but several times but in exchange for that he not only didn't kill a single person but also apologised and gave out weapons and tips to the royal family.... is this even life?

Someone spits in your face and you give them an amazing gaming computer???

And the worst thing is, the story was so good up until that part....

TL DR : My first ever review was used on a novel that had amazing potential but fucked up.

Garbage story.  In almost all aspects.

The English is awkward and you have to make it all flow in your head because the author simply can't write in English.

The story is basically a wish fufillment story with a shitty world and a pretty boring cast.  Also, the protagonist does a complete 180 in chapter 34, that makes you wonder what the previous 33 chapters were for.  It becomes a completely different story, for no reason at all.

Not worth reading at all.

This history had an amazing potential, but unfotunately was not able to keep it up.

I guess the author changed his mind as where he wanted the story to go in the middle of it,unfortunately even forgetting the premises that made the readers interested in the history in the first place.

I think it will be the only thing that will get my praise in this review. The quality of the chapter keeps going up, but it would be great if you could find someone to help you with proof reading and grammar.

The idea is kind of "original" but unfortunately lacks a main plot, better describe this as "A slice of life of a OP MC".

Character review:
The MC lacks a strong caracter, or depth. My guess is that because of some criticisms to the MC personality, the author tried to make him more likeable. Breaking the first thing who have caught my attention in the summary "This is not a novel about a kind MC, so read AT YOUR OWN RISK".

After being betrayed almost resulting in the death of the MC and his wife, the MC pardons one of the culprits without further investigation, and even agrees with one of the conditions imposed by this culprit to tell the whereabouts of the mastermind behind the attack.Now I would like you to remember that the MC was tortured for months, everyday without rest, but didn't even spare 5 minutes to think this over and forgave someone who tried to kill him for the second time.His wife supported this idea, or rather offered him this option. Now I'd like you to remember that Lucy was raped day in and day out for almost 3 years, and just like that offered forgiveness to someone who tried to kill her and her husband, this someone once tried to kill the MC after he killed someone who tried to rape Lucy.

To summarize this review in a simple pro/cons list:

1-Fast paced, be it on the MC status growth, the romance or even the lack of sense in some parts.

Cons:
1- Don't mind the lack of plot.
2- Don't mind a lack of depth to the characters.
3- Don't mind with the snowballing of the stats value, who seems to confuse even the author sometimes.

The grammar is terrible,

I could understand what was being said but the grammar was worse than machine translated.

I even got a headache from trying to read.

Good story idea but changed into something stupid.

Don't see any style. And the mc who has been tortured for 5 months forgives someone for trying to kill him like it's nothing. Let's witnesses live and is just straight up stupid.

Re:Monster Without the Quality Writing or Lore

Poorly written rehash of Re:Monster fiction only without character development, conflict that gets resolved too easily and a boring overpowered ability that made Re:Monster not as enjoyable as it could have been.

The story had great potential but it was completely ruined by the writing. The grammar is really terrible. He doesn't even capitalize the first letter in his sentences through certain chapters.

Even if you look past the poor grammar, the writing itself is bad. The story is unnaturally fast paced. I felt like I was reading a picture book without pictures. The sentences are structured poorly. Style definitely needs work as well

The story interested me because I haven't seen any other parasite reincarnation stories on this site, but it really wasn't a worth it. It is barely readable I guess, if you're really bored.

Read only if bored

It's nothing worth spending your time on, standard wishfullfilment fantasy with nothing to differentiate it from the mass. Every unique trait of the story that was hinted in the beginning is rapidly abandoned. The ability to possess others quickly turns into standard stat points absorbtion, hatefull mc with trust issues quickly reveals his secrets to a character he knew for a couple of days. The story seems to cantain all the cliches of all the web novels, the mc buying slaves, the evil holy church that descriminates against other races, the arrogant and petty noble that decides to kill the mc since he did not give him face (ignoring every sign that the mc is powerfull, even when they are painfully obvious).

All said, read only if you don't have anything else to do.

Run on sentences are a grammar sin. Stop sinning.

Super fast paced. The grammar is amazingly bad. Characters are one-dimensional. The grammar in this story is a crime against humanity. It's that bad.

I just couldn't do it. Cool premise, shows promise, needs to be re-written without constant run-on sentences.

For a readable story either rewrite it or proof read it.

A below average re:monster fanfiction with an overpowered main character who had a sad past.

The grammer is primary, which is sad because the premise is actually intresting (could be because  im a sucker for nonhuman main characters.)

No style to speak of and no notacible lovable characters anywhere.

I do not recomend it, even if you have a lot of time to waste and nothing better to do.

To the author I am being harsh because your story could have been great. Take a break for a day or two then go back and read what you wrote you'd be surprised. You have tried to write a really hard story, I mean how many bestselling books have you seen with a nonhuman protagonist? People will hate me for this but you should think about either writing an easier story to start with or continuing with this story that is currently on the track to nowhere.

{Could'nt read it all so i skimmed through most of it.}

Now I feel horrid... Excuse me while I go hang myself.

This Review was made 3 hours after chapter 6's release.

The whole idea of this fiction intrigues me, I mean I can understand being reincarnated as an undead, goblin and other monsters but a parasite? It's a great idea.

I'm giving the character score 2 stars since by chapter six I've only seen the main character and he doesn't like other living things much.

Of course as you've mentioned you don't have a proof-reader so grammar isn't the best but if you'd like one then I'd be willing to do the job for you.