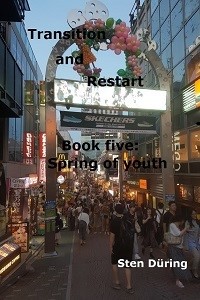 Remove Ads
Previous Chapter
Next Chapter
“When did your parents transit?”

Noriko turned to Yukio. She had studied him and Kyoko. Had studied them since high school as an example of how some couples get it right from the start. Just like her parents.

“Ten years ago,” Noriko said and turned a slab of meat on the grill. “To help Nakagawa out.”

“You're staking a lot on him arriving and building himself a position of power.”

Noriko shrugged. “And you? You're transiting yourself. We don't even know if it works.”

“It works, Urufu said it does. We have the signals. Sure, their future and cryptic like hell, but signals anyway.”

That was trusting the Swedish branch of the transitioning foundation a lot. Noriko knew why Urufu did, but she had never been able to trust anything that blindly.

After turning the slab once more she decided it was good to eat. She took it on a plate and went to find a place where she could be alone. Transitions and arrivals as an everyday topic for their dinner talk. It had been years since.

And you say they'll be even more open about it in the downstream world. I hope you're right.