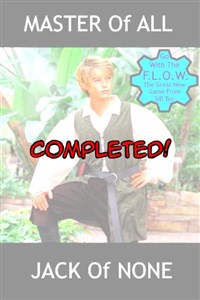 Mythran's Master Of All - Continued (Completed!)

Creator of L.I.F.E. Begins and Bookworld

This started out as Mythran's property. It's a tribute to his story and I wanted to continue Ren's tale. The first 16 chapters by Mythran are here: Master Of All, Jack Of None  Please Note: This story has been completed at 10,010 pages or 2,752,750 words, Dec. 7th, 2018 (Previous records of 2 million March 31st 2018, First record of 1 million on May 30th, 2017)
17 year old Ren Haddon hasn’t had an easy life. His drug addict parents used him as a lab rat and left him almost crippled for life. After they were caught, he went on to spend his life in the hospital. Under constant care, the white walls of his room was all he knew... until that day. That fateful day his name was drawn out from millions of others to receive a one of a kind class in the new virtual world game called F.L.O.W. (‘Fantasy Life Online World’). These are his adventures.

Creator of L.I.F.E. Begins and Bookworld

The fact that Ren is adorable cannot be disputed. However, I think that it is greatly overdone when every 'obtainable' female he meets is immediately twitterpated, lovestruck, and in awe of how pretty he is. In fact, it bothers me a lot that this story, the relationships at least, are ALL driven by his looks. Also the fact that there is never anyone else who is capable of appropriately flirting, and for some reason, all of the bad guys have the same exact 'evilness complex' (that is, they all believe that they have a right to lay claim to things, and people refusing to grant them what they claim as theirs makes them inordinately pissy). I'd recommend the author read 'HJPEV and the Methods of Rationality' for a proper take on bad guys. Sorry for all the negativity, I know that this particular issue is not unique to you, but I really liked the original, so I guess I'm taking out my frustrations with amateur writers on you.

While I really do appreciate the fact that you've decided to continue one of my personal favorites on this site, I do hope you got permission from Mythran to continue his story. This is just a preliminary review on what I feel can either go really well, or end in disaster. I'm not trying to be pessimistic, but emulating an author's style is really hard. I can understand that you want to take a dropped story that was honestly one of the best ones on this site and revive it to it's former glory, but you have to be careful to not mess with it too much. A lot of the reviews that are coming in are coming in out of the pure nostalgia factor that this story gave so many people. In short, please don't ruin the memory of the story for others. I would much rather read a story that was dropped but retained it's originality than a sad reboot a la Ghostbusters. Do your best, I look forward to how you'll build this world.

Not bad doesn't mean it's good

2 starts for wasted potential. It's not bad. But being "not bad" doesn't mean it's good.

It went from "MC is artisan and can't use weapons = can't fight" to "MC is artisan, has super weapon that is not weapon and kills experienced fighters hundreds level above him" in like 10,20chaps ...

Had potential, devolved into a brainless harem

The initial story, albeit not started by this author set up quite a lot of potential for future prospects. Which this author did keep up for a short time. However, as the story progressed, the initial characters (barring MC) are either discarded or become very 2D, in the case of the female characters I could almost replace all of their names with one and I wouldn't be able to tell the difference barring the size of their breasts.

Generally, this in itself is not always bad. However, I believe I am quite critical of it because it is very likely not where the initial story was meant to be going.

There are some good plot points such as:

These are actually quite well written and had me intrigued. But then parts of even that devolve into sex.

Finally, and the reason that I will discontinue reading this series:

You literally gave him the capability to:

Improvements I think either in future writings or perhaps to this one:

It seems like all I have to say is negative, I hope it is not taken to heart but kept in mind. You do have potential as a writer. From the plot points you have created, they develop intrigue and the initial characters have depth. It's the continuation of said things that I think should be the focal point of your improvement. I also think that while it is great you were inspired by the original story, through that certain expectations have been set - not through any fault of your own. So perhaps our reviews are a bit more critical than they ought to be.

This story started out great, quickly became one of my favorites on Royal Road since I enjoy stories with crafting in it. Then the sex happened. soon after the Dwarven Arc starts, it becomes Sex, slightly less sex, more sex, 1 chapter for story progression/repetetive crafting, suprised reactions, then repeat with more sex. Painful, and want to read more about actual story, but dropping due to a sex scene every other chapter.

Just one big harem story for the "nice guy"

I read this for like 200 chapters... constant sex... bland antagonists... at the end of it all just a feel good story for all you "white knights"... and soooooo hypocritical ... i couldn't take it anymore..

The Beginning was good

As stated in the title the beginning was great. I really liked the story and I even made it until chapter 673...

Up until the dwarven lands arc it seemed to be planned out well and had a reasonably well story flow. During that arc it got quite repetitive at some points. Then came the arc's climax which went very well in my opinion. But after that... The story started to deteriorate majorly.

It is most of the time very descriptive. For example: MC says that blablabla, to what Character answers blublublub. After that MC does this and that. But then he remembered to do that and this. AnotherCharacter comes does something to what MC says something.

That kind of writing is tiring and ultimately boring. Let the characters themselves speak.

Adding to that, you dont need to describe every little fart the MC does. I understand that you want to write in "real time", to prevent (large) time skips... But a lot of the information you give the reader is simply not necessary to progress the story and is therefore filler content.

As described in the introduction, I liked the story. Up until a certain point it was a great read. After that a mediocre one, but one I still wanted to follow.

Now with the recent chapters regarding a specific deity it was just enough. I started skipping paragraphs and couldnt be bothered to read any further. So I decided to drop it.

I wont get into a more detailed analysis of the story as it is now nearly 9000 pages long, way too much content to review sensibly.

It is ok. Any glaring mistakes are found and edited quickly. It is not perfect though as there are often times repetitions of words/content, coinciding with the overall style.

I will only say, read the review from @Morkin as he details the characters well.

I'm sad to drop a story of such a dedicated author.

Good continuation, till it turned shit

If like I you came to this story because you are a fan of good crafting focused stories then this and the original is the story for you......till the dwarfs are introduced. At this point the story starts focusing more on the relationship of the main charecter, which I was fine with as long as crafting which is his class remained relevent.

This however all went out the window when the missunderstanding of dwarf culture appeared, yet I persistend and was rewarded. Untill the charecter made the most stupidest and anoying decision and decided to go into a serious relationship with the AI dwarf charecter just because he was dumped in real life. The real life dumping was alright but when he makes a decision to go into a relationship within the game where time advances 4x as fast as real life (meaning he leaves his wife for days before returning) and where he may never return to if he has a medical problem - banning from the game - which is very likely, then he will have a mental breakdown being unable to return to the one he "loves" while the dwarf wife who the aurthor has made us attatched to will be sad and lonely as her husband leaves him forever.

now as the story has 400 something chapters I'm sure this doesn't happen, but it doesn't change the fact that he is an idiot and that based on other reviews I've read that crafting takes a back seat for the rest of the story - which is the main reason I wanted to read this story. So take a chance and read past ch 104 which is where I lost intrest.

The story started off as an excelent continuation, and was absolutley amazing. But after just one or two arcs the mc started being unbelievably OP and he started laying nearly every girl he meets, nearly every chapter. Besides being unbelievable, that repetative sex gets boring and then annoying and unbearable.

It has a good beginning from where it left off but the farther in it gets the worse it gets and the more grating everything becomes. 2/5

I would categorize this story as 'slice of life' as there aren't really any heavy themes in it, nor really any overarching plot or conflict. Any conflict there is can be resolved by the main character no sweat because he's a Gary Stu. 2.5/5

There is no story here, or at least plot points are so far apart as to have a negligible presence.

All characters are garbage. The author doesn't know how to write compelling or complex characters. Why are there so few players in this game? There is nothing written in as to why Ren is so much better than everyone else when he's apparently doing things anyone could do. Also everyone he meets conveniently lives within a traveling distance to where he is. All the female characters are written the same and all the male characters are written the same. Also, despite seeming to have the moral high-ground, Ren is super sexist and an asshole.

The way Ren throws money around would destabilize the in-game economy and throw everything into Chaos. He can approach everything with non-chalance because he's got plot armor and nothing will go wrong for him. He gets more and more unlikeable as the story goes on.