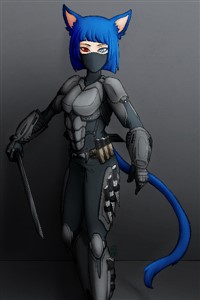 I am quite happy that i am the first to post a review hehe first dibs!!

So the first few chaps were a bit confusing as the author was stil trying to find his own way  as how he/she wants to make the structure of his writting.

What i mean by this is that it was confusing as to whom was talking you kinda had to fiddle a bit and reread parts to know who is talking or what they meant with inside jokes ect.

As for the story itself i like the interactions between Ellie and Kira its just Kiramazing hehe.

Release speed is very decent a very mayor good point as many peeps on royalroad want to make stories with 100+ chaps but never even get farther than 15 chaps or so -.-..........

I hope to read the completion of this novel.

Oh one last thing the first 10-15 chaps or so i wasnt really amazed til the interacactions between Ellie and Kira became rahter uniq at that point i am now waiting each day for a new chap to be released as i cannot wait for more fluffy weird antics of these 2 chars.

This says a lot it doesnt feel copied but rather original to the 2 chars.

A tale of easy mode

I started reading this because Exterminatus wrote it, and I wanted to check out his other works after found out how much I like Large Chests.

I read 85 chapters of this series, and I don't really regret doing so. It wasn't too bad of a read.  But I doubt I will finish it up because there's just no tension. This is because the MC's are too powerful right from the start for anything to ever threaten them.

And even when the fights end there isn't really anything funny going on, the fights just end and life moves on to the next chapter where everything's lighthearted and lovey dovey. A meteorite could fall down and threaten to the destroy the entire planet and one of the MC's would just blow it up because it was blocking the sun. (That didn't happen, but if it did that's pretty much how the fight would end.)

It's not outright bad though, just not comparable to Exterminatus later works.

Delusional in a good way. Honestly, I couldnt call this anything other than original with its plotline. Not every day you get this kind of stuff. But, I suppose that is only par for the course when you realsie who wrote this.

Sure, there might be some humour that doesn't sit completely right with me, but things like that can be ignored for its excellent style and flawless grammar. There is no reason not to read this. 5/5

What an amazing piece of wonder.

Reviewed at: Chapter 70 - Beware nostalgia, it is a dangerous thing that warps our memmories

To start I want to notify that english is not my first language and thus some wierd things may appears in my sentences and grammar contructions.

That said. READ. THIS. STORY. ITS. FREAKING. GOOD. you know.

The 60 first chapter are a cute story of a couple. Realy fun to read an realy nice to follow.

But the masterpiece happens after the 60+ chapters.

There you will have a very very good "Ankh-Morpoky" feeling about the world the characters are evolving in.

The utterness absurdity of the watch's rules, the racial behaviours, the totaly random and wierd events ....

That's marvelous. Every chapters I laugh and I want to read more.

I think i'll buy the books on amazon.

Thanks again to the author for providing us such an amazing story.

Fell off the wagon

It has (had) potential, it started out ok if a bit confusing and i can see how it would be on par with ELLC.

But the author dropped the ball, most of the story is a confusing mess and the way many things are handled makes little sense, and the no killing thing was frankly stupid and ridiculous from the start.

Unlike an 'insanity' story it's just a mess no entertainment or 'crazy person' mentality at all. And the whole "it's your loss if you mind it" thing was just another hole to sink the ship.

The choppy sentence by sentence style was not, and never will be, acceptable in any story but a childrens book.

Made it to chapter 44

Unfortunately, I don't actually like any of those things.  I really wanted to like this story too, a really great concept, somewhat wasted.

Still, it's good reading while you're between more substantial material.

I started out reading the author's other story, Everybody Loves Large Chests, and I enjoyed it so much I decided to start with his first story.  While the evolution of the author is obvious, his sense of humor remains the same which makes Binary Soul a truly enjoyable read.  I was stunned to find in an Author Note that English wasn't his first language.  I would have sworn he was British!  I guess it's truly your loss if you mind it.

Great and Fun story to read!

This is a great execution of a fun fantasy that takes on the world without taking itself too seriously.  Props to you Exterminatus for drawing me in to an endeering story, making me laugh, and keeping me wanting to come back for more!  *salute*

Less a review than a comment. I know it's for affect and an experiment, but please don't ever use this writing style again. The short choppy one sentence paragraph after one sentence paragraph starts to become a drain to read considering the line breaks you use between each. Nothing flows and the entire thing becomes a staccato of disjointed ideas that should connect but don't.

Don't be put off by the mass posting of early chapters, this fic is well worth a read. The style and structure slowly get better, so don't be put off by all the one-sentence paragraphs. The story and grammar and characters are excellent from the beginning.

AND IT'S SO CYGNAS-DAMN FUNNY!! I LOVE THIS!!